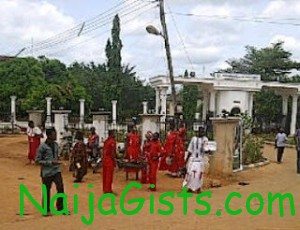 This strange incident took place at Benson Idahosa University, Benin when a female student of the said institution claimed that her Brazilian hair was stolen from her room sometime last week. naijagists.com

She returned from lectures on that fateful day, to find out that her N75k Brazilian hair, which she’d planned to fix that weekend for a wedding was missing in action. 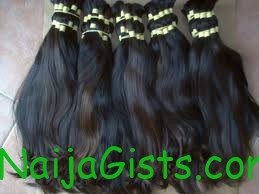 After asking her roommates and everyone denied taking the weave, the female student resorted to diabolical means to get her weave back. She invited the bini juju group called Ayelala to come to the school to curse and fish out whoever stole her weave.

The photo above was taken during the juju group’s visit to the school. The group promised the female student that whoever stole her weave will return it within seven days. The university authorities have been informed and students are waiting to see what they’ll do.