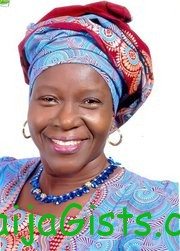 The hubby of a Professor of Religious Studies, Oyeronke Olademo at the University of Ilorin committed suicide few days ago following a request for money that was turned down. naijagists.com

At the time of her husband’s death, Prof. Oyeronke Olademo is the bread-winner of the family.

According to a source, who pleaded anonymity, Mr Olubunmi Olademo requested some money from his wife on Tuesday. But Oyeronke was said to have declined his request.

Our correspondent learnt that Olubunmi, had initially left a note threatening to commit suicide if his wife refused to give him the money.

Our correspondent was informed that Olademo later called his wife on the phone reiterating his threat, but she would not bulge, instead she reported the matter at the Tanke Police Station.

The Division Police Officer, immediately began a search for Olademo. All efforts by the police team and some members of his family to determine his whereabouts reportedly proved abortive.

According to the source, one of the couple’s children later informed Oyeronke that her father went to their new building site.

The search team was said to have immediately rushed to the uncompleted building and found the lifeless body of Olademo dangling from a tree with a rope around his neck.

The police were said to have moved the corpse to about 7.30am on Wednesday to the University of Ilorin Teaching Hospital.

The Professor, our correspondent learnt, was arrested and later released on bail.

He told journalists that the officials of the state Criminal Investigation Department were already investigating the circumstances surrounding Olubunmi’s death.

“It is true. We got information that the man was missing on Tuesday. This morning, his lifeless body was found dangling from a tree at Tanke area of Ilorin. His corpse was later evacuated and deposited at UITH while investigation into the matter has commenced,” he said.