The 35 Russian diplomats accused of taking part in the hacks against the Democratic Party and Hillary Clinton’s campaign have been expelled from the United States.

The Russian Diplomats from the Washington DC embassy and the consulate in San Francisco were given 72 hours to leave the US with their families.

This tough move follows calls from Senior US senators to place a sanction on the Russian diplomats who allegedly played a major role in the hacking, which some lawmakers called America’s “political Pearl Harbor”.

The expelled diplomats were believed to have interfered in the November 8 2016 US Presidential election that gave Republican candidate Donald Trump lead in key Democratic states.

President Obama vowed to take action against Russia even as the country continues to deny any involvement.

Shortly after the strong move by the US, Russian Embassy in the UK took to Twitter to call Obama a lame duck. 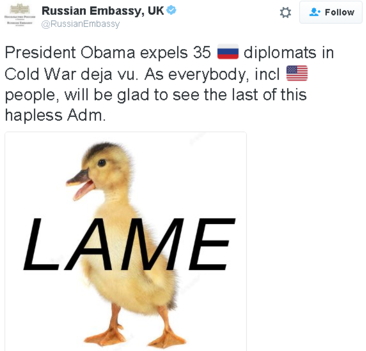 Continue Reading
You may also like...
Related Topics:diplomats, russia, sanction