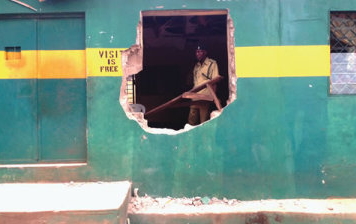 December 28, 2017 – Uyo Jailbreak: 14 Out Of 47 Inmates Who Escaped From Ikot Ekpene Prison Re-Arrested 24 Hours After Escape

The Controller of Nigeria Prisons Service (NPS) in Akwa Ibom , Mr Alex Oditah today announced the re-arrest of 14 out of the 47 inmates who escaped from the Ikot Ekpene Prisons.

The inmates escaped from the prison on Dec. 27.

Oditah also told NAN in Uyo that three-man committee had been inaugurated to ascertain the immediate and remote cause of the incident to forestall future occurrence.

“Some inmates escaped from Ikot Ekpene prison on Dec. 27, at about 12.45 p.m.; To ascertain the total number of those that escaped we have to do headcount.

“We discovered that 47 inmates had escaped from the custody. Immediately search party swung into action and 14 were recaptured,” Oditah said.

The controller added that four of those who escaped died from bullet wounds when they tried to over power prisons officers on duty.

Oditah added that some of the prisons officials, who sustained different degrees of injuries, were receiving treatment a undisclosed hospital.

He explained that the escaped inmates seized utensils like knives, machetes and other dangerous materials to aid their escaped.

The controller of prisons disclosed that the 400 capacity Ikot Epene prisons,currently houses 831 inmates.

“The capacity for Ikot Ekpene Prisons is 400 but as of Dec. 27, the prison custody 831 inmates most of the inmates are awaiting trials.

“The Prison facilities are over stretched and requires urgent attention,’ he said.

He assured that prison officials other security agencies were working extra hard to recapture the remaining inmates.

Oditah appealed to members of the public to assist the authority with useful intelligence that would aid the arrest of the fleeing prisoners.

He noted that security had been tightened in and all prison formations in the State to forestall breach of security.

The controller appealed for logistics assistance from the Akwa Ibom state government to ease its operational duties.