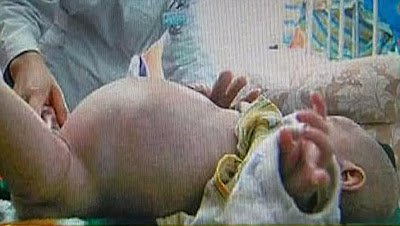 This story sounds strange but it is very true.

Xiao Feng was transported to the hospital after he suffered severe breathing difficulties after his stomach had become swollen due to pressure from inside.

After his admission, doctors discovered that Feng was pregnant with an undeveloped fetus of his own parasitic twin brother. He was immediately rushed for emergency surgery.

The surgeons removed a fetus measured 20 cm in width and had a fully formed spine and limbs, including fingers and toes.

The parasitic twin would have developed into a boy and had grown so large that almost 2/3rds of his affected twin’s stomach was taken up.