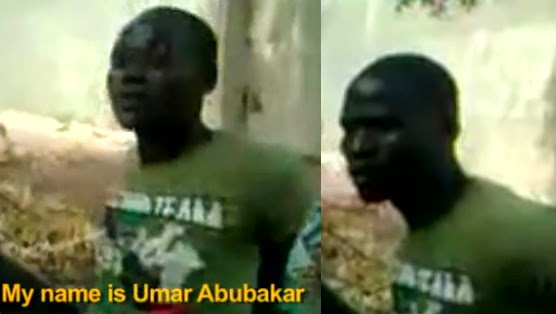 A very disturbing video of Boko Haram terrorists beheading a Nigerian Naval officer has been uploaded on YouTube.

The gruesome video uploaded by Sahara this afternoon on YouTube displayed a helpless Naval officer identified as Umar Abubakar.

After a series of questioning by the blood thirsty jihadists, he was gruesomely beheaded.

The sect members later paraded with his head in a jubilant display while shouting Allahu Akbar (God is great).

Before his murder, Umar Abubakar identified himself as a member of Section 9 of the Nigerian Armed Forces involved in anti-terrorism operations against Boko Haram.

The terrorists ask him to state his salary and he told them N40,000.

He also disclosed that his commanding officer was a 2nd lieutenant. The insurgents displayed their victim’s identity card, chanting that the world should know that Allah had given them an enemy.

Here are some questions one of the sect leaders ask him.

“So you were sent to kill Boko Haram? And you are serving the state instead of Allah? We are members of Jama’atu Ahlis Sunna Lidda’awati Wal-Jihad and Allah has given us an infidel today,”.

Thinking that reprieve would come his way, the captured military operative proclaimed himself a Muslim of Jama’atu Izalal extraction, but the insurgents, who spoke Hausa mixed with Kanuri, dismissed his plea. Their leader said: “No amount of prayers will save you, we will judge you according to the Quran.”

After beheading him, they held up his severed head in jubilation as one of them used a mobile phone to take the gory scene.

The headless body of Umar Abubakar was seen in a pool of blood with his hands tied to his back.

Due to the graphic nature of the video, we can’t display it here. You can watch it on YouTube, it is titled “How Boko Haram Members Decapitated Nigerian Airforce Officer”

How can these people say a god sent them to kill people.

Why is it that the same trend of event is going on in this world presently.

What kind of god will send people to kill its creature… I don’t get it… I think something is not right here.

May the soul of Umar Abubakar rest in peace.