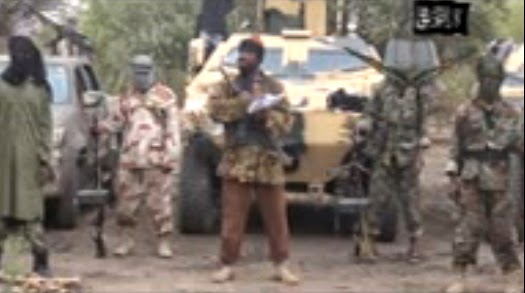 …. I will kill Jonathan’s daughter

The leader of the dreaded Boko Haram Islamic sect, Abubakar Shekau, one of the most wanted terrorists in the world is definitely thriving in his hideouts in Nigeria.

In a new video released today, Shekau was surrounded by several terrorists chanting Islamic victory slang as he vows to soak Nigeria with the blood of Christians and Muslims supporting them.

He also claims the sect kidnapped the school girls.

“I abducted your girls. I will sell them in the market, by Allah,” Shekau said

Watch the video below and see the mini translation after.

“It is Allah that instructed us, until we soak the ground of Nigeria with Christian blood and so called Muslims contradicting Islam. After we have killed, killed, killed, and get fatigue and wondering on what to do with smelling of their corpses, smelling of Obama, Bush and Jonathan worried us then we will open prison and be imprisoned the rest. Infidels have no value.”

“Just because I took girls in Western school they are worried. I say they (the girls) should desert the school. They should go and marry. Stupid people. Talking about human rights and democracy. Nonsense. People that are doing same sex marriage and saying they are leaders.”

“I will imprison Jonathan’s daughter, any one that turn to Islam will be saved. For me anyone that embraces Islam is my own. Stupid Jonathan, you will be surprise. Until the land is soaked with blood.”

“I have no time with your trillion. I am working for Allah and will die for it. No one can stop me. You killed Mohammed Yusuf. Are you not saying he is even better than Shekau? Even if you kill me, other fighters will rise better than me, I am nothing and worthless before

Allah who I am working for. You are sitting with Christians and saying we are one, saying there is no difference. We are not one with infidels.”
“It is a lie, in fact you suppose to wash and re-wash a plate Christian eats food before you eat as Muslims. You know all these things and you are contradicting Islam. Are Christians the people we should play with? They killed us in Shendam, Zangon Katab and all the places. It is either you are with us or you are with them, and when we see you, we will harvest your neck with knife.

Why is the US not helping Nigeria battle these stubborn terrorists??? If care is not taken, these terrorists might use the dreaded Sambisa forest as a terrorists training and breeding camp.

God please come and save Nigeria from these blood-thirsty terrorists.