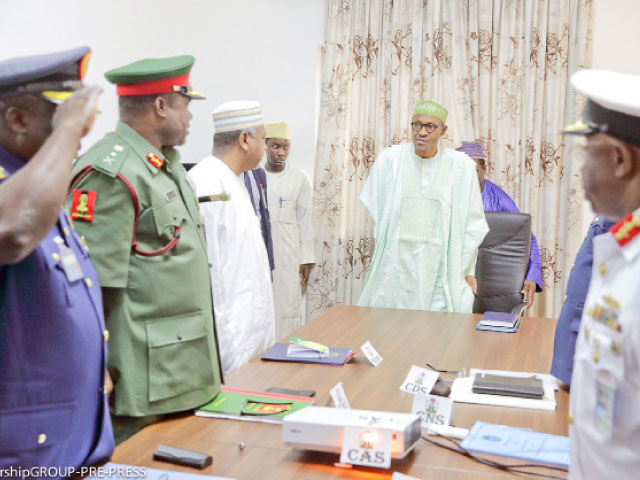 On that same date CDS Badeh announced the cessation of fire, we, without privy to the classified information the Army had but yet recognizing the ominous nature of such a dangerous, irresponsible and reckless Army decree, released a statement strongly rejecting Alex Badeh’s cessation of fire with the terrorists. Refer: “Nigerians Reject Ceasefire With Boko Haram Terrorists.”

By October 21st, Boko Haram killed another 19. This happened when they staged a road block between Gamboru Ngala and Dikwa and at Logumani, 19 kilometres from the border with Cameroun. Two truck drivers were killed with their assistants along with several commuters. Some were shot, others slaughtered, food looted and property burned.

While the killing continued across Nigeria, the nation’s Army chiefs insisted they had negotiated with the terrorists and had an accord with them. Nigeria’s soldiers were told to maintain standing down and the little protection they offered the people was now ceased, leaving the people at the total mercy of unrelenting, wild and death delivering terror.

By October 30th, while the Nigerian Army command under CDS Badeh still insisted on ceasing fire, Boko Haram swept across Adamawa state conquering the entire north of the state including Mubi, one of the largest trade cities in the north. Boko Haram ravaged cities it conquered and loaded over 90 trucks of citizens’ property which they carted across Nigeria’s borders to markets in the French neighbouring states, Chad and Cameroon.

By November 2nd, in spite of Boko Haram’s leader, Abubakar Shekau releasing a video in which he sneered at the so-called ceasefire, and the terrorists continuing to kill hundreds of Nigerians across the northeast, Nigeria’s Defence Headquarters, DHQ insisted the ceasefire deal was still on.

According to Nigeria’s Terrorism Prevention Act of 2011 and the Amendment Bill of 2012, there is no accommodation for negotiation with terrorists in the first instance; anyone implicated in acts terror according to the bill is to be sentenced to death.

It is also important to note that according to the bill amendments of 2012, the office of the National Security Adviser is the co-coordinating body for all security and enforcement agencies. NSA Sambo Dasuki is therefore implicated in the unconstitutional negotiations with the terrorists and the deaths and rape of hundreds of Nigerians and loses of property that followed.

When inquired about this act of national treachery that further compromised the nation and its territorial integrity, NSA Dasuki casually responded in a talk at Chatham house UK that “we cannot go and punish Idriss Deby.”

The Army never formally called off the cessation of fire. Till date the Nigerian Army never explained the reason for the blunder to the Nigerian people and no officer took responsibility and stepped down or was charged for the deadly betrayal of their responsibilities.

In January of 2015, Baga and environs was swept by Boko Haram terrorists who killed over 2500 defenceless Nigerians and burned down hundreds of buildings. It was one of the worst genocidal atrocities in human history and the worst singular episode of terror in the last decade.

But the incident was not a simple unexpected accident, it was the consequence of indictable military failure. In the Paris security summit of 2014, Nigeria, Chad and Niger had committed to station 700 troops each to make up a Multi-National Joint Task Force, MNJTF to protect the vulnerable communities of Baga and environs from the clear and present dangers of Boko Haram.

Citing no show of purpose, capacity and seriousness in combating a real and prevalent danger, by the Nigerian authorities, Niger, Nigeria’s northeastern neighbor withdrew its troops from Nigeria in October. The Nigerien government cited the impunity of operations of Boko Haram in Nigerian cities as their reason for withdrawal. BBC: “Niger Foreign Minister Mohamed Bazoum told the BBC Hausa service: “We have 50 soldiers there and decided to withdraw them after Boko Haram captured Malamfatori town in October and continued to operate in the area with impunity.”

Niger further criticized Nigeria for failing to contribute its quota of 700 troops as agreed in the Paris Summit, citing this failure as a reason for its withdrawal.

Compounding the disastrous picture, media reports in November suggested a withdrawal of Nigeria’s own forces from the northeast in a malicious “tantrum” type response over the National Assembly’s refusal to approve of an extension of a state-of-emergency request by President Goodluck Jonathan.

When Channels TV reporters inquired of Nigeria’s CDS, Alex Badeh on the withdrawal of our neighbors’ troop commitments from the MNJTF, in violation of the Paris accord, thereby leading to the death of over 2500 defenceless Nigerians, the Army Chief simply dismissed the grievous violation as “a thing passed,” just as NSA Dasuki had.

In view of the above and a series of further gross violations of office including strong and substantiated accusations of human rights abuses by the Nigerian Army under their command, Nigeria’s National security Adviser, Sambo Dasuki and its Army Chiefs have failed in their sworn duty to protect Nigeria’s sovereignty and integrity.

Weeks into their assumption of office, rather than address Boko Haram terror, the military chiefs were dividing-up thousands of square meters of land in Abuja, set aside for Asokoro military barracks.

While some might view the relocation of these Army chiefs to Borno to fix what they broke, as a reasonable repudiation for the time being, such a “punishment” does not satisfy the responsibilities and commitments to our Federal government. Actions that have been referred to as war crimes and crimes against humanity. Those who have through their actions and inactions, led to the death of Nigerian innocent citizens must have their command of our security apparatus rescinded with immediate effect. This is in all fairness to the dead, the maimed, the raped, the displaced and those who have lost theirs.

Nigerians did not simply and determinately vote out the singular person of Jonathan, thinking he alone was responsible for the hardship, loss of lives and territory, and chronic failure to defeat Boko Haram; we understood his executive cabinet and service chiefs were equally and in many cases more directly implicated in the failure that delivered us pain and cost us our lives. It was this entire team we condemned and voted out, giving President Buhari the mandate.

We plead the Federal Government is sensitive to the reality of its citizenry. Asking Army Chiefs potentially guilty of war crimes and facilitation of terror to probe themselves is not nearly enough and does not recognize the urgency for redress and the continuous risk of the citizenry. To restore and preserve the competence of our military, its men must be taught discipline top down and assured of good leadership and good leadership only. Responsibility and recourse for indiscipline, recklessness, nonchalance and failure to fulfil sworn obligations must be dealt with promptly and completely.