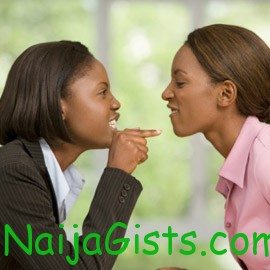 Mujidat Akintoye, a 35-year old single lady, , who confessed to having sexual intercourse with her neighbour’s husband in their bathroom, has incurred the wrath of the housewife who fought her.

Mujidat made this alleged shocking revelation to Mrs. Aishat Shaidu, while they were quarelling at their residence at  8, Idowu Lane, Off Kumuyi Street, Olodi-Apapa, Lagos, Southwest Nigeria.

According to Mujidat, who is currently facing a case of assault and conduct likely to cause breach of public peace at the Apapa Magistrate’s Court, Lagos State, she had been having sex with the same man her neighbour was boasting about.

She was alleged to have said publicly to Aisha that, “just as you have sex with your husband in your room, I also have sex with him in the bathroom,” and asked the housewife to stop boasting about the man.

Her statement resulted in a serious fight between her and Mrs. Aisha, who was allegedly beaten to a pulp by Mujidat.

Officials of the Tolu Police station later arrested Mujidat and charged her to the Magistrate’s Court     with asault and misconduct.

Part of the charge read: “that you, Mujidat, on the same date time and place did conduct yourself in a manner likely to cause breach of public peace by telling Mrs. Aishat Shaidu that you made love with her husband in the yard.”

The offence she allegedly committed is contrary to Section 166 of the Criminal Code Law of Lagos State of Nigeria 2011.

She pleaded not guilty and the presiding Magistrate, Mrs. A. K. Shonubi, granted her bail in the sum of N20,000 with one surety in like sum.

According to neighbours  there had been constant quarrel between the two women who did not see eye to eye, with the tenants trying endlessly to intervene.