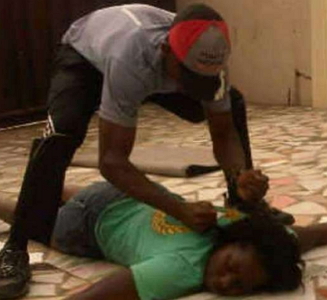 A Tinubu Magistrates’ Court on Monday heard that a 23-year-old man, Ahmed Ishola, bit off the lower lip and tongue of a Lagos State Neighbourhood Safety Corps (LSNSC) official.

The police said Ishola committed the offence while the unnamed officer tried to stop him from beating up his girlfriend.

They made the allegation during Ishola’s arraignment before Magistrate A.M Olumide-Fusika, on a two-count charge of assault and breach of peace.

Prosecuting Inspector Ben Ekundayo said the defendant committed the offence on June 18 at about 8:30am, on Elegbata Street, Lagos Island.

According to him, Ishola bit off the lower lip and tongue of the Neighbourhood Watch man who intervened when Ishola was beating up his girlfriend.

“The defendant was beating his girlfriend in front of Nawarudeen Central Mosque and the complainant tried to intervene but Ishola came at him with a broken bottle.

“While wrestling to take the broken bottle from the defendant, he bit off the Neighbourhood Watch man’s lower lip and tongue causing him serious injury.”

Mrs. Olumide-Fusika granted Ishola N100,000 bail with two sureties in the like sum.

She adjourned till August 9, for trial

Continue Reading
You may also like...
Related Topics:bites, lip, lsnsc, off, official, tongue