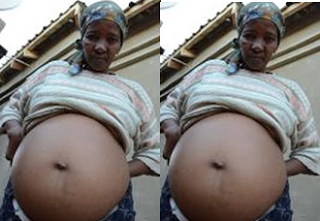 Though she resembles a pregnant woman, Maria is not pregnant.
Her stomach is currently housing a live snake.

The woman said several prophets and herbalists told her she has an evil snake living in her stomach.

In 2011, Maria visited the hospital where doctors told her she had a form of growth in her belly. After an operation, nothing happened

“They told me I had lost blood and they wanted to operate on me but nothing happened after that. The nurses put me on drips but a few days later, they released me.”

Maria Tsotetsi said after she battled constant stomach pain, she complained to her boyfriend who later took her to one bishop.

The bishop told her to remove her clothes and gave her a muthi herbs to steam.

“The muthi was covered in a white and brown snake skin. The bishop said it would cure me,” Maria said.

Few days later, she realised there was something in her body and her teeth started falling out.

“I believe the muthi made me lose my teeth. My boyfriend then dumped me after 14 years and I’ve been single ever since. “I want him to come and remove the snake he put in my stomach. I believe he’s responsible for this.”

She said she sometimes has her period for two weeks and it’s so heavy she has to use nappies.

An herbalist named Ntisimbi Ngema told Maria she is a victim of jealous lover.

She was told there is no way she could have a new boyfriend because her ex-lover has planted an evil snake inside her stomach.

Doctors said Maria Tsotetsi is currently suffering from all sorts of medical conditions like kidney stones, severe indigestion and others.

OMG may the Lord heal this woman.

Now it’s time to run to God, she needs to stop going from one herbalist to the other.