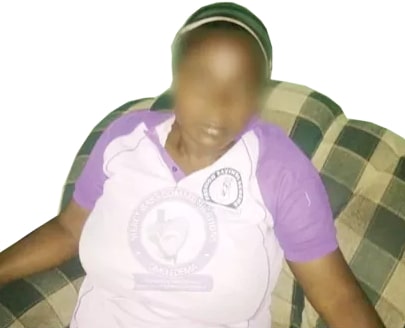 Kidnapping for ransom especially along Owo/Ikare road in Akoko area of Ondo State has become rampant in recent time. But the escape of Mrs Funke Oyebade from the hands of ritual kidnappers has added another dimension to insecurity in Sunshine State. BABATOPE OKEOWO reports the close shave with death of the petty trader.

A victim of ritual kidnap, Mrs Funke Oyebade has narrated her close shave with death in the hands of her abductors who wanted to use her for money-making ritual in Akure, the Ondo State capital. Funke, whose escape was due to providence and luck, said a den of rituals exists around Alagbaka/ Igbatoro road in the state capital and that many people who were declared missing by their families might have been used for ritual purposes.

The woman in her late thirties said what she saw in the ritual kidnappers’ den would make anybody shiver. She narrated how people who vomited blood into calabash died and their remains sold to cannibals and human parts’ dealers.

Appearing on a popular programme on Adaba FM called ‘Omo Edema’ Funke said she was kidnapped on December 27, with a trick that seems new compared to their previous modus operandi. She said her narrow escape from the kidnappers after many horrific hours was by divine intervention.

Funke explained that she went to collect a new ATM Card at the First City Monument Bank (FCMB) in Oshinle area of Akure when she fell into the hands of a commercial motorcyclist who called her by her name and claimed to have once lived in her father’s house a long time ago when she was still a little girl.

“It was around 1pm, I went to collect a new ATM card at the FCMB, Oshinle, that day. As I had collected it, I went outside the banking hall to change the default pin and to perform a withdrawal.

So, he claimed he was once a tenant in my father’s house in Idanre when I was still a little girl. I now greeted him cheerfully.” Funke said the bike man asked her address and she mentioned the area, the man then asked where she was going from the bank. She said: “He also asked me where I was going from the bank and I told him Arakale Area of the city. He now informed me that he is a bike man and that he could me take me to my destination but I would pay for his service. I saw nothing bad in it because I would definitely pay transport fare to where I was going. “We left the place, heading towards my destination; a guy just shouted ‘brother’ and began to greet the bike man as if it had been a long they last saw.

The bike man apologised to me as he stopped to greet the guy. He eventually asked where the guy was going to and he mentioned market square area which is around the same road I was going.

“The bike man pleaded with me to allow the guy sit behind me on the motorcycle since he was not going far. I accepted without suspecting any evil.” She said immediately the man sat behind her, she lost her senses. According to her, she discovered she became weak and the supposed bike man headed for a different direction entirely. Her words: “He headed for Federal Secretariat Road. I could not protest; I was just looking as if I was dying. As we got to Igbatoro Junction on the road, the man behind me on the bike blindfolded me with a red coloured handkerchief. And the journey continued for many minutes but I did not know where we were going. “We got to a place, they stopped and I heard somebody say ‘madam, come down!’ I came down.

It was as if they dropped me for another group of two and the bike man and his partner left. “We began trekking. One person held my right hand and another one held my left hand supporting me as we trekked for a few minutes.”

She narrated further that they finally got to a place where they removed the blindfold and she discovered it was an uncompleted building in the bush. She said she met many people with some of them looking like they were going or returning from offices. She said: “They removed the blindfold from my eye and sat me down in the midst of some people probably under some hypnosis.

Though, they were not tied, they were there not really conscious of where they were. A few of them were in corporate dresses. No one talked to another among them. “As they sat me among them, the captors left the room for outside not too far from us where they were discussing. I discovered I was gradually coming back to my right senses. So I overheard one of them say that the ritual would commence by 3pm.”

“My phone was with me and the money I withdrew from the bank where they picked me from. I started to send text messages to those that I could remember that I had been kidnapped by ritual killers. I sent to my husband, my mother and to my sister. Just as I wanted to send it to my pastor, one of them dashed in to where they kept us and snatched the phone from me in annoyance, saying that I was too brave to be pressing my phone in their camp.

They collected the ATM card on me. One of them brought in a stone and started to hit the screen of my phone and the chip area of the ATM card.” Funke said when it was around 3pm; they came in and began to attend to them one after the other.

She said they brought in calabashes; one with a cover taped with a red piece of cloth while other calabashes were empty. She said: “They would place the covered one on the head of whoever was next and place the empty one on the ground in front of the person and immediately the person would vomit blood into the empty one after which they would collapse. “I had concluded that was my end. But when the ritual got to my turn, they placed the calabash on my head and placed an empty one in front of me. I did not vomit blood.

They questioned m e again that who was behind me, but I could not respond. “I heard them say my head refused to harbour evil. Another person among them said ‘if she refused to vomit that would still not stop the parts of her body from being used for some other things.’ But one among them said they had no buyers of body parts for now.”

She said while they were saying all these, one of them who was behaving like their boss now instructed them to push her out that nothing whatsoever was useful in her.

According to her, the other people were very furious at her and said since nothing was useful, they would not make a double loss. They collected from her the N40, 000 cash she had withdrawn from the bank before she was kidnapped. She said: “They blindfolded me again and returned me exactly the way and manner they brought me. I could not recognise anything.

All I knew was that they later dropped me, removed the blindfold and told me to wait there that they were coming back. It was on an untarred road they dropped me.

“In a short while, I got up from there yet could not say anything. After a long trek, I discovered I finally came out around an area called Idiagba Titun behind police band office in Akure from where I located the road to my house.” Worried by the activities of commercial motorcyclists popularly called ‘Okada,’ the state government has banned all activities of commercial motorcyclists in the state beyond 10 p.m.

The Commissioner for Information and Orientation, Mr. Yemi Olowolabi, said this was done to curb criminal activities and to ensure maintenance of law and order.

Olowolabi, however, noted that any motorcyclist that would be on the street in any part of the state beyond 10 p.m must not pick any load and must show evidence of ownership of such motorcycle.

He stressed that the ban does not affect private motorcycle owners who may be going to work or attending to an emergency. Olowolabi said: “It has got to the notice of the state government that some people are perpetrating criminal activities under the guise of operating Okada till late hours of the night and this has to stop, as the issue of security of lives and property remains a priority of the government.”