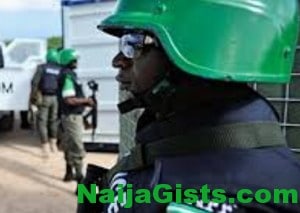 An Housewife Glory Uchenna, has been remanded in prison custody by a senior magistrates court in Port Harcourt, Rivers State, for stabbing her neighbour to death.

The 27-year-old mother of one, allegedly stabbed Imoh Cletus, her female neighbour at her back with a kitchen knife.

A document obtained from the court alleged that the accused stabbed her victim over an alleged trespass.

“The only problem we had was that anytime she wants to take her bath, she must look into our room and I have warned her several times but she continued doing it”.

She allegedly committed the offence on February 7, 2019 at about 3:30p.m. at Elikpokwudu, Rukpokwu in Obio/Akpor local government area in the state.

The single count charge of murder was not read to her hence she did not take any plea. She was not represented by any lawyer either.Magistrate Gomba Osaro ordered that she be remanded in prison custody.

She also ordered that her case file be duplicated and remitted to the department of public Prosecution (DPP) for legal advice. She adjourned till March 28 for DPP’s advice.

Continue Reading
You may also like...
Related Topics:Kills, neighbour, woman