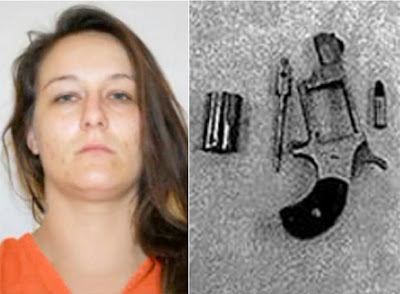 Do you remember the story of a woman who hides a fully loaded gun in her private part few months ago? If you missed the story, read it here.

In March she was arrested with another lady in front of a restaurant when a drug dog alerted police officials.

A quick search was made and a semi automatic pistol was found.

When she was taken to jail, Harris told an officer “several times that she needed to go to the bathroom,” the The Smoking Gun reported.

While she was being processed, Harris was hesitant about pulling down her underwear so that a female officer could check for contraband and “advised that she was on her period and did not want to.”

After Harris finally relented, Officer Kathy Unbewust reported, “I observed at that time a wooden and metal item sticking out from her vagina area.” Unbewust then “pulled the item from her vagina and found it to be a 5 shot revolver with rounds in the chamber.”

According to investigators, the weapon found under her private part is a Freedom Arms .22-caliber handgun loaded with 3 live rounds and 1 spent shell.

She has been sentenced to 25 years in jail.