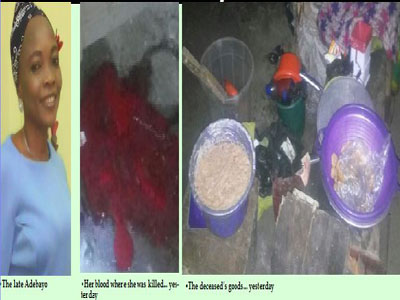 According to the Nation, A yam cake seller was yesterday killed by stray bullet allegedly shot by officers from Olosan Police Station.

The late Kudirat Adebayo, a mother of four, was murdered near the toll gate in Mushin.
The incident occurred around 6pm at Ogunmokun/Toll gate area, Mushin, Lagos.

The woman’s death led to fracas between the street boys and the officers.

Many scampered for safety as police shot sporadically to disperse the street boys protesting the woman’s death. They stormed the police station on motorcycles.

We learnt that the officers were chasing a ‘Yahoo yahoo’ guy who ran through Ogunmokun/Toll gate areas on motorcycle and heading towards Onipanu.

Policemen were said to have shot at him when it was impossible for them to nab him, but the bullet hit a woman selling yam cake (Ojojo) around Toll gate area.

Angered by the officers’ action, the boys mobilised themselves and headed to the Olosan Police Station.
Eyewitnesses said they were chased away with gun shots. About five of them were said to have sustained injuries.