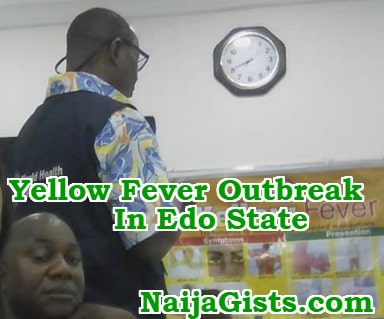 The government of Edo state yesterday confirmed the death of 9 people in the state following the yellow fever outbreak in the state.

“Already, nine persons have been reported dead so far since the epidemic was first reported.”

“We have recorded nine cases of yellow fever. The disease has spread to 10 LGAs out of the 18 LGAs in Edo State.

“Late arrival is the problem we have. We have informed the Minister of Health.”

Osifo said the Federal Ministry of Health had promised to provide more vaccines, while health workers had been directed to adequately respond to suspected yellow fever cases.

He urged residents of the state, particularly rural dwellers and farmers to embrace sanitary practices and be properly kitted whenever going to their farms to prevent the disease from affecting them.