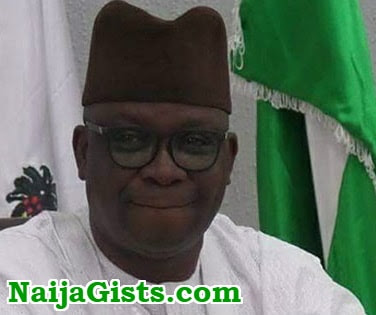 A Federal High Court in Abuja on Monday heard how Ekiti State Governor, Ayo Fayose, allegedly instructed officials of Zenith Bank to receive the N1.2billion sourced from the Office of the National Security Adviser (ONSA) preparatory to the 2014 governorship election in the state.

A senior official of Zenith Bank, Lawrence Akande, made this disclosure while testifying as the second prosecution witness in the trial of Fayose’s aide, Abiodun Agbele.

Agbele is arraigned alongside others on 11-count charge of laundering about N1.2 billion.

The prosecution said the money formed part of the N4.7billion allegedly transferred from an account belonging to ONSA, to the account of Sylvan McNamara, a company allegedly owned by son of a former Minister of State for Defence, Musiliyu Obanikoro.

Lead in evidence by prosecution lawyer, Wahab Shittu, Akande said he received a telephone call on June 17, 2014 from Fayose, directing him to liaise with Agbele to pick up some money in Akure.

Akande, who said he serves in Ibadan as Zenith Bank’s Zonal Head, added: “On June 17, 2014, Mr. Ayodele Fayose called me and said that I should liaise with Mr. Abiodun Agbele about a deposit to be made in the bank.

“He (Fayose) said the deposit will be coming through Akure. And I called Biodun Oshode, who is in Akure to liaise with Mr. Abiodun Agbele. And that is all I know about this issue.”

He said Fayose, Agbele and the governor’s wife are customers of Zenith Bank.

Continue Reading
You may also like...
Related Topics:fayose, money laundering