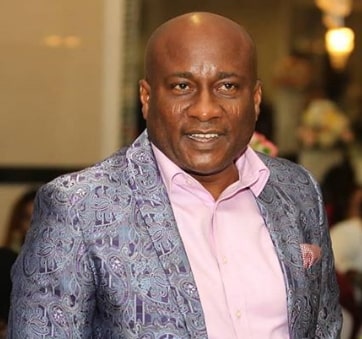 The founder of Air Peace, Allen Onyema is currently in a deep mess over an alleged $20 Million money laundering case in the United States.

The billionaire businessman is believed to have worked as a consultant for the Niger Delta amnesty programme in charge of training repentant militants.

“I do not understand what President Buhari has to do with Mr. Onyema of Air Peace being indicted and charged in the USA. According to our attorney-general, the Federal Government has not even been informed of the situation.

“American laws go after those who break them. What a man sows… How much has Nigeria invested in the Niger Delta amnesty programme, NDDC and 13 per cent derivation funds? All, mostly in a black hole (sic).

“Do we know the extent of poverty, ignorance and disease in the Niger Delta? Please let America too help us see how Niger Delta underdeveloped Niger Delta. Those of us from the Niger Delta who are the direct beneficiaries of the suffering that emanated from the looting of our wealth will tackle them. It is our war that is being fought.

“Laws, Nigerian or American, go after those who break them; so we must mind our business. QED! We are smarter now than ever before. Gradually, the scales of tribalism, religious affinity and political loyalty are falling off our eyes and being replaced by Nigerianism. Nigerians are not keen on tales by moonlight. Let him return to America to face his accusers.”

In a series of tweets on Sunday, Lauretta Onochie lamented the manner in which funds meant for the Niger Delta amnesty programme were allegedly diverted into private pockets. 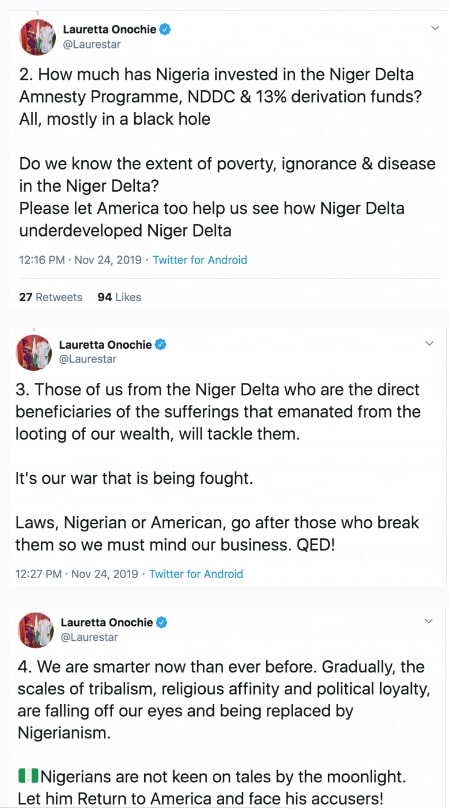