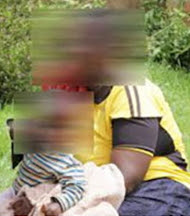 The 37-year-old woman pictured here, a married mother of five children has allegedly confessed to eating 10 human beings alive with her syndicate in the witches coven.

In a recent chat with a media outlet in Harare, the alleged witch said she approached some deliverance ministers for help in 2012 but they couldn’t exorcise the spirit of witchcraft.

She added that the spirit which became very strong that same year has enabled her to eat 10 people alive with ten others still awaiting death.

The woman said her husband wasn’t aware of her participation in the occult world.