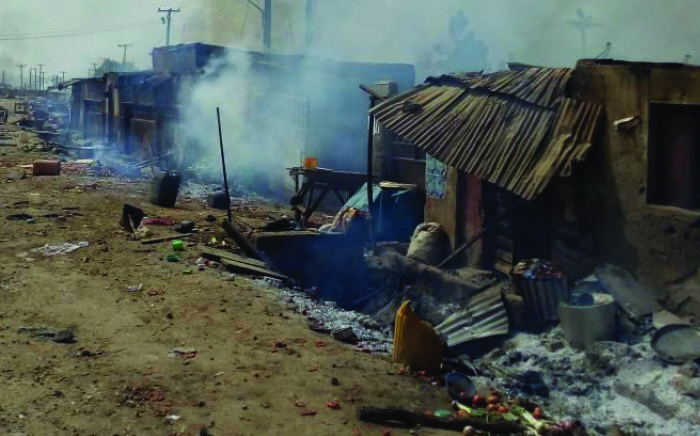 On Monday the 25th of December, residents of Bwari area of Abuja experienced pain and sorrow as some Hausa/Fulani hoodlum clashed.

According to residents, 10 person reportedly died in the crisis that started at 9 am.

Residents told Daily Sun that the crisis began when Christians were attending the Christmas service, and were attacked by Fulani leading to the burning down of the ECWA Church in the area.

It was gathered that the crisis between the Fulani and the Gwari who are the indigenes of the area had been lingering for sometime and that the Fulani who had allegedly been planning to carry out the attack, decided to do so on Christmas Day.

But eyewitness accounts insisted that the clash was over an alleged murder of a native Gwari.

An earlier face-off on Sunday night reportedly left a Gwari native dead. Angered by the alleged murder, armed youths in the area mobilised and launched a counter attack on Hausa/Fulani community.

During the counter attack, it was gathered that houses and small shops belonging to Hausa/Fulani settlers were set ablaze. Residents who could not take cover as at when the attack was launched, reportedly sustained different degrees of injuries.

One of the eyewitnesses said the settlers also launched their own attack on the major shopping plaza, opposite the headquarters of the Joint Admission and Matriculation Board (JAMB). The plaza, beside a new generation bank, was set ablaze by the angry Hausa mob.

Some shops in Bwari major market, belonging to natives, were also set ablaze by the irate Hausa youths.‎ According to eyewitnesses, while the attacks lasted, security agents were reportedly not within the area.

As at the time of filing in this report, security agents had already taken control of the area. Major streets and roads had been condoned off and also deserted.

But when contacted, media aide to FCT Minister, Mr. Abubakar Sani, told Daily Sun that a clash between two cult groups led to the fracas. He dismissed claims that the appointment of a native as a traditional ruler led to the face-off.

He revealed that the minister, Muhammad Bello, had already summoned an emergency security meeting with heads of security agencies in Abuja.

He said the minister was also expected to visit the area to assess the level of damage. It was unclear if a curfew would be declared to forestall another breakdown of law and order.

Meanwhile, the Nigerian Army deployed soldiers from the Guards Brigade to restore law and order while motorists using the route to Kaduna, Plateau and other states were advised to take alternative routes for their safety.

Similarly, the Nigeria police deployed its anti-riot operatives and men from the Anti-Bomb Squad to the area.

A resident of Bwari, Joshua Yohanna, taking refuge at Dutse, a satellite town near Bwari, claimed that several persons were killed as the Fulani turned the fight into a religious one after they set the ECWA Church ablaze.

He confirmed that the crisis between the Fulani and the Gwari had been lingering for years and that was not the first time the two would be clashing.

Although he could not give the specific number of persons killed, he said no fewer than 20, could have died as the Fulani took the Gwari and other residents by surprise.

He said: “I can tell you that there has been palpable tension between the two tribes over ownership of land. This problem has been on ground it did not just start today.

“But what is surprising is that the Fulani decided to unleash terror today (yesterday) that is Christmas, which is very bad. They knew that nobody would be prepared.

“We started sensing dangers when a large number of Fulani suddenly appeared in the morning hours when we were getting ready to go to church. Before anyone knew what was happening, they started setting shops, houses and business premises belonging to Christians and the Gwari on fire.

“We still did not understand what was really happening until they set ECWA Church on fire and started killing people using knives, clubs and other dangerous weapons.” Another resident, Musa Yunusa, said he was getting ready to visit some of his relatives when the news of the attack got to him:

“I did not know what was happening until somebody called to inform me. By the time I tried to escape, some Fulani men ran after me it was only by the grace of God that I escaped being killed.

“As I speak to you, several people have been killed and they have killed many people who knew nothing about the cause of the crisis. I thank God that the police and soldiers rushed here to take care of the situation.”

A commercial driver, Mohammed Sanusi, who plies the route to Kano and Kaduna, told Daily Sun of how one of the passengers in his vehicle broke the news of the attack to him, when he was close to the area and had to divert to save his life and those of his passengers.

He said the riot took a very dangerous dimension after the Fulani burnt down a church, which he said turned the crisis to a religious one.

FCT command Police Public Relations Officer (PPRO), Anjugurl Manzah, said, “for now, normalcy has returned to the area. We don’t know the cause of the clash yet, but we have deployed enough strength of men to the area.

“I cannot speak on the exact number of casualties from the crisis. All I can say is that we have been able to control the situation.”