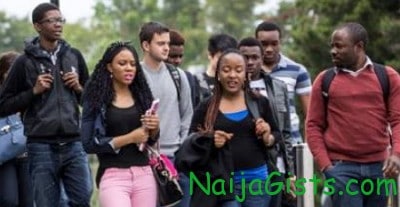 At least  152 Nigerian scholarship students in the United Kingdom universities could be deported home as early as this week except their fees are settled immediately, according to The Telegraph of London.

The students are said to be sponsored by a regional agency and some of them are saddled with debts of up to £20,000.

The name of the sponsor agency was not given in the report.

The report described the students as “some of the Nigeria’s brightest undergraduates.”

They have been told that they will not receive their degree certification even though many of them completed their courses in the last academic year.

The newspaper said some of the affected students claimed they have been warned they could be deported by Friday, October 20.

It said the Nigerian High Commission in London confirmed that 152 students had been caught up in the scandal, and that the sponsor agency had been left with a “draught of funding” due to a slump in Nigeria’s oil revenues.

The High Commission said in a statement that additional funding had been approved for 87 students.

There was no mention of how soon the bill would be paid.

The universities of Leeds and Essex said they “sympathised” with the affected students but declined to say whether their visas would be revoked.

They said that they were working closely with the Nigerian High Commission to resolve the dispute.

The University of Sussex claimed it had allowed one student to graduate, but declined to comment on whether their transcript had been withheld. It added that it had been providing “some financial assistance for living costs in cases of particular hardship.”

Borno Governor: Buhari Told World Bank To Focus On The North Because Of Boko Haram
Chief Adebanjo Calls Buhari A Dictator In Explosive Interview, Says He Belongs To The Northerners