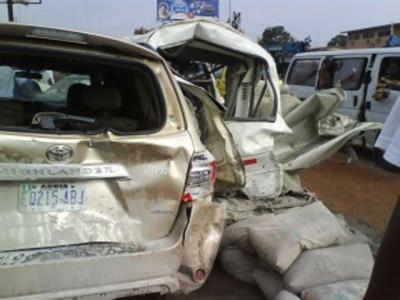 Wreckage of the collision

At least 16 people were reported killed in 2 bus collision on the Okene-Auchi expressway in Kogi, Sunday Maku, the Sector Commander of the Federal Road Safety Corps (FRSC ) in the State, disclosed on Tuesday Nov 8, 2011.

According to Mr Maku the head-on collision happened on Monday as one of the buses attempted to overtake another vehicle.

The Toyota Hiace buses marked XT 911 FKJ and XJ 700 USL were travelling  in opposite direction with 30 passengers on board.

The corpses were deposited at the Okene General Hospital mortuary. The severely injured passengers are being treated in Okene General hospital.