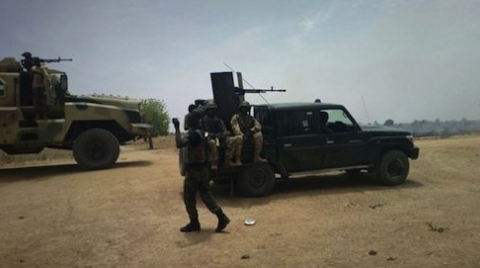 The Nigerian Army has revealed that troops of 114 Task Force Battalion, 28 Task Force Brigade, in conjunction with some vigilantes in their area of operation, have carried out clearance operation of reported remnants of Boko Haram terrorists along Bita-Madube Ciki-Njubul axis.

During the advance, two soldiers unfortunately stepped on a buried Improvised Explosive Device (IED) that seriously injured one of the soldiers.

“Nevertheless, the troops continued the advance and had contact with the terrorists and cleared them out of Madube Cikin, killing 4 insurgents, destroying 2 vehicles and 2 motorcycles belonging to the terrorists. The troops also recovered 2 cylinders, 1 AK-47 rifle, 3 boxes of 7.62mm (Special) ammunition, 2 bicycles and bags of grains.”

“The troops also rescued 54 persons held hostage by the Boko Haram terrorists. The released hostages are being screened while the wounded soldiers have since been evacuated for proper medical care,” a statement by Colonel Sani Kukasheka Usman, acting director, Army Public Relations said.