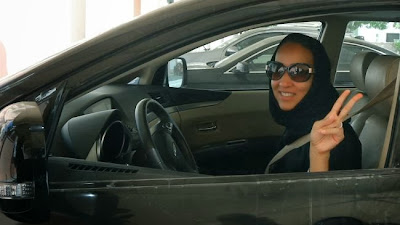 Two of Saudi Arabia’s best-known female advocates for lifting the ban on women driving were arrested and detained on Friday after being caught behind the wheel in the country’s capital.

Aziza Al-Yousef, who was driving the car, and her passenger, Eman Al-Nafjan, tell CNN they were pulled over and spent a few hours at a police station in Riyadh until being released into the custody of their respective husbands.

Al-Nafjan, one of Saudi Arabia’s most prominent bloggers, and one of the organizers of the popular October 26 Women’s Driving Campaign, said she decided to go for a spin with Al-Yousef to attract more attention to her cause.

“We were looking for the police. We drove by the police station on purpose,” she explained, adding how she welcomed the detention.

Despite repeated attempts, CNN has been unable to reach Riyadh police for comment.

Al-Nafjan, who tweets as “Saudiwoman,” says she has grown tired of waiting for the Saudi government to allow women to drive.

Al-Yousef has driven before and was glad to get behind the wheel again on Friday but says she was not deliberately looking to be detained by the police.

“In a way it is good for the cause because you’ll the keep the issue in the mind of people,” said Al-Yousef. “However, some people might understand wrongly that we’re confronting the government and that might slow the process.”

Pope Francis Is An Antichrist, All Catholics Will Go To Hell Fire – Nigerian Pastor Chris Okotie
Kenyan Man Jailed For Having Sex With Goat