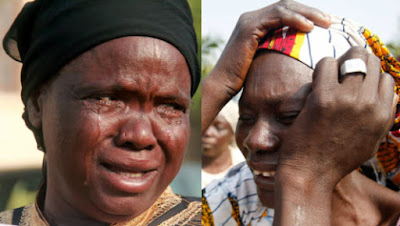 The parents of Chibok schoolgirls still in Boko Haram captivity have expressed sadness over President Muhammadu Buhari’s “silence” concerning the fate of their daughters.

In a letter to the president, the parents lamented that 20 of them have died while waiting for the return of their girls.

The sect released 82 of the girls in May, following a prisoner-swap deal with the Federal Government. Five months later, 21 girls were also freed.

Subsequently, government promised that more girls would be freed.

However, no information has been heard from the federal government which prompted the parents to lament that “if there is any time we are so much worried about our girls then, it is now, when we don’t seem to here anything again from any official.

“When the 21 girls were rescued, we begged to be part of the reunion so we could hear about our missing daughters, but, we were denied that opportunity.

“Again, when the 82 came home, we were so happy knowing very well that we could meet them and hear about our daughters, even if they are dead, so we could bring this to closure.

“Again, we were denied the chance to meet them, till today.

“We have been travelling to ask our local leaders to hear from them but no one seems interested in briefing us about any effort or action by the federal government, to secure the release of our daughters. We feel neglected.

“When government promised to secure the release of the girls, repeatedly, we thought it won’t be long after the 82 girls were rescued, having seen how possible that was.

“Right now, we are hopeless and more traumatised than before because, it seems the successes recorded are now considered as closure since no one is paying any attention to our grief.”

Demanding that government talk to them “and tell us exactly why the delays,” the parents also said they want to know the state of their daughters and when they are coming home.

“We want government to deal directly with parents of the missing girls, let us know what next.

“Do not stop us from meeting the rescued girls, we could hear words of comfort from our daughters, through them, and to know whether they are alive or not; for us to know the next step.

“We have lost 20 of the parents, we don’t want to lose any one of us in this situation again.

“Please, respond to our call,” the letter read.

Continue Reading
You may also like...
Related Topics:Buhari, chibok, girls