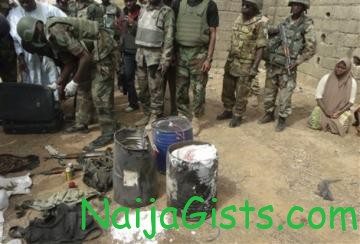 Soldiers of the Joint Military Task Force have killed three Boko Haram Islamists and recovered arms and ammunition in a crackdown on the group in the restive northeastern city of Maiduguri, the military said Wednesday.

Military spokesman, Sagir Musa said government troops lost one soldier with one injured and arrested 31 suspects during the offensive against the extremist group in the Bulabulin Ngarnam area of the city on Tuesday.

“In an exchange of fire, one soldier was killed, one injured and one immigration personnel missing in action,” he said.

Nigerian troops have carried out a series of raids on suspected Boko Haram hideouts in Maiduguri, the epicentre of the insurgency by the extremist group.

Boko Haram has repeatedly targeted the security services as part of its campaign across northern and central Nigeria.

Violence linked to the Boko Haram insurgency is believed to have left some 3,000 people dead in the country since 2009, including killings by the security forces. source