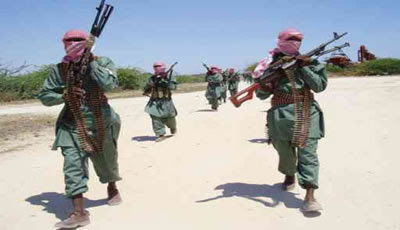 The sect members were also reported to have attacked a military check point around the pilgrims area.

He explained that three of the attackers were captured with various items, including one AK-47 rifle, one RPG, 48 rounds of 7.62 (special) ammunition, among others.

The insurgents, according to an eyewitness, attacked the school at 9.30pm in their hostel.

Mohammed Idi, who survived with gunshot injuries and is receiving treatment at the Accident and Emergency Ward of the Gen. Sani Abacha Specialist Hospital, said he was shot by one of the insurgents when he came out of the hostel after hearing gunshots.

He said: “We were sleeping in the hostel and suddenly heard gunshots outside, very close to the hostel. We got confused and many of us ran for our dear lives.

“Immediately, I came out, I saw one of the gunmen close to the hostel and he started shooting at us.

“I was shot in the leg and the bullet went through my bone. I tried to run but fell down because my leg was very stiff and I was in pains. Somebody came, grabbed my hand and started dragging me and we ran away together.

“Initially, I thought I was in the enemy’s hands until I realised that it was one of our students who was helping me to escape.”

One of the doctors at the General Abacha Specialist Hospital, one Dr. Salim Umar, disclosed that the hospital had received 11 dead bodies and seven others with various gunshot injuries.

Umar confirmed that one of the dead students had some injuries on his hands. He explained that all the students killed were either shot on the head or in the neck.

Yesterday’s attack brought an end to almost 10 months of relative peace in the state capital, Damaturu, and other parts of the state.

The situation has compelled the state government to revert to the earlier curfew of 6pm to 6am instead of the 9pm to 7am that was reviewed last week.

Meanwhile, some parts of the state capital like Potiskum, Ali Malami Estate, and pilgrims area were locked down by men of the Joint Task Force, JTF, in search of the attackers even as increased search of goods, vehicles and humans have been intensified at the check points in the metropolis.

Maiduguri residents witnessed a mild drama when an 11-year-old girl grabbed the collar of a local perfume (Turare) vendor, accusing him of being among those who slaughtered her father and mother in the dead of the night about nine months ago.

Some witnesses said the 11-year-old girl, who was hawking sachet water at the Gamboru area of Maiduguri metropolis, saw the man believed to be in his early 30s, and immediately recognised his face as the man who, in company of four others, attacked her family.

Traders said the man could not run away because of the large crowd that had gathered. He was, however, saved from being lynched as the police arrived and whisked him to a nearby police station.

Meanwhile, Defence Headquarters has assured that troops in the ongoing emergency rule in Borno, Yobe and Adamawa states have been adhering to the rules of engagement.

Defence Headquarters also expressed satisfaction with some individuals, particularly youths, who organised themselves into vigilante groups to join in efforts to fish out terrorists within their communities.

This is just as elders, leaders and stakeholders of Peoples’ Democratic Party, PDP, in Adamawa State described the declaration of state of emergency in the state as having political undertone.