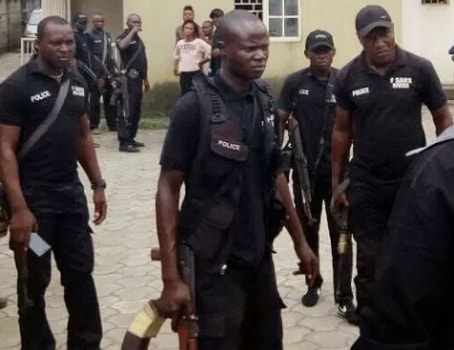 Four operatives of the Federal Special Anti Robbery Squad, FSARS in Ikeja on Wednesday killed a teenager in Lagos.

The incident which happened in Satellite Town while the FSARS men were chasing criminals sparked protest on the social media with many calling for the scrapping of the FSARS.

The innocent boy who was sent on an errand was killed by sporadic shots fired by the FSARS men.

Reacting to the incident, police spokesman Chike Oti, a Chief Superintendent (CSP) said four of the policemen had been detained.

“The attention of the Commissioner Police (CP) has been drawn to the news making the rounds on the social media that SARS operatives accidentally shot and killed an eighteen-year-old boy at Satellite Town Lagos.”

“In view of the unfortunate incident, the CP ordered that the policemen involved be arrested for questioning.”

“However, it must be stated that the FSARS operatives left their base in Ikeja today August 1, to Satellite Town, Lagos, with a clear directive to arrest notorious armed bandits that have made life unbearable for the people of the area.”

“They succeeded in arresting one of the hoodlums but the rest of the gang opened fire on the policemen leading to a shootout.”

“The CP has ordered an investigation into the matter. The team is mandated to investigate, arrest and prosecute anyone found culpable in the shooting saga- civilians and policemen alike.

“Further development on this matter would be communicated to the public as usual.”