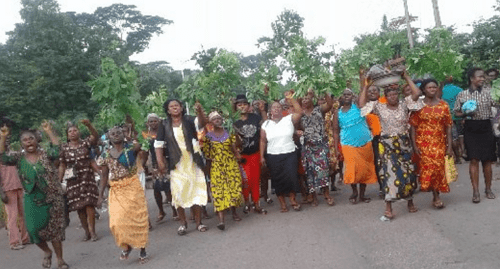 The land dispute between Abba and Ukpo, Prince Arthur Eze’s Community, has lasted 44 years in the state.

Over 500 indigenes of Abba community, including students, security operatives stationed in every point of the town teargased women and elders with the victims scampering for safety.

As a result, the state police command arrested 12 persons, including three women.

They are yet to be released as at the time of filing this report.

Abba community had planned the peaceful demonstration along Onitsha- Awka expressway to protest alleged takeover of their land by Ukpo community.

The Supreme Court had delivered a ruling on the land dispute in January, asking the two communities to return to the High Court to begin the case afresh following alleged missing of court documents relating to previous ruling on the matter.

As early as 6.00am on Tuesday, hundreds of stern-looking policemen had blocked the expressway and the road leading to Abba, while the women were stopped from doing their businesses in the market

The teargas canisters that landed inside the Community Secondary School in the town, forced the students to abandon their classrooms to join the protest.

Vehicular movement was hindered for several hours in the area, forcing motorists to use alternative roads to their various destinations.

One of the Community leaders in Abba, Mr. Obinna Chukwuma, regretted the development, describing it as unfortunate.

He added that their decision to embark on a peaceful demonstration was to let the world know what they were passing through over their land.

According to him: “Abba is a peace –loving community, but Abba is under siege.

“We have been living in harmony with our neighbours but all of a sudden, a money bag from our neighbouring community, Ukpo, decided to take over our land by force.

“Anybody approaching this community from Awka would see the sign post with the inscription, ‘welcome to Abba’.

“That is our boundary with Ukpo and they know it very well. That was why, when they wanted to build their local government headquarters; they built it on their land.

He added: “But unfortunately, they have come into our own land to mount a banner with the inscription ‘welcome to Ukpo junction, Dunukofia local government.

“That is why the people are protesting. We don’t have arms, we are not fighting anybody. We just want the world to know what is happening”

“Last week, the security operatives blocked our community with 12 hilux vans. Today, there are more than 500 policemen and over 20 hilux vehicles, including anti-bomb vehicles just to mount a signpost on our land, even when Boko Haram is driving people out of their homes in some parts of the country.

“We are going to use peaceful means to let the world know what is happening in our community.”

State Police Public Relation’s Officer, PPRO, Mr. Haruna Mohammed couldn’t be reached to confirm the arrests but a Senior Police Officer in the state, who spoke on condition of anonymity, told this reporter that the Command would not allow anybody or group to cause mayhem in Anambra.

The Police officer said their concern was not the land dispute but security of life and property in the state.

He said that they were deployed to the Community to secure the lives of the people.