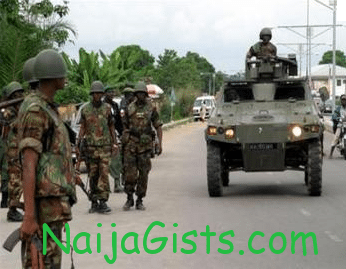 The Nigerian Army said it had killed five suspected Boko Haram members and destroyed a bomb making factory in Rigasa area of Kaduna.

The spokesman of the 1 Division, Nigerian Army, Col Sani Kukasheka said in a statement in Kaduna that the early morning raid was carried out in conjuntion with other security agencies.

He said two other suspects were injured during the operation.

Kukasheka said various arms and explosive devices were recovered during the operation in a house located off Makarfi Road in Rigasa.

“On approaching the factory, some suspected terrorists opened fire and also threw already primed IED at the troops.

“The exchange of fire that ensued resulted in the death of five terrorists, while two that sustained various degrees of injuries are being treated.

“In line with our resolve to deter terrorists, the building housing the factory was demolished.”

The spokesman attributed the success of the operation to the support of “well meaning citizens” who volunteered information to security agencies.

He commended their courage and assured that security agencies in the state would remain committed to the fight against terrorism.

Kukasheka said such raids were meant to secure the lives and property of law abiding citizens and restore peace to the state.

He reiterated the need for all residents to support security agencies with vital information on suspicious activities of people around them.