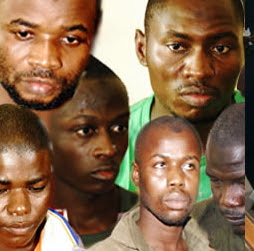 Five suspected Boko Haram terrorists believed to have ties with ISIS were arrested in Benue and Abuja on the 26th of March 2017 while plotting to carry out major terrorist attacks on the US an UK embassies in Abuja.

According to DSS spokesperson, the suspects were also planning to bomb all western embassies in the FCT.

Another self confessed terrorist, 20-year-old Adamu Datti was also picked up in Yobe on March 22nd, 2017

They are currently undergoing investigation in detention.

Continue Reading
You may also like...
Related Topics:abuja, bomb, embassies, isis, us

Ex PDP Chairman Muazu Is The Owner Of Ikoyi Lagos Home Where EFCC Recovered $43.4Million
DSS: We Won’t Release Gabriel Suswam Until He Tells Us Why He Has Arms In His Facilities