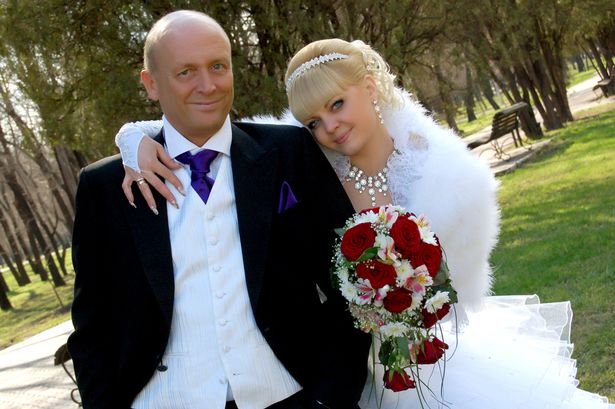 Singer Wayne Denton while struggling to find romance again, tried a Ukrainian online dating site and found himself a new wife almost half his age. naijagists.com

Glancing at his watch, Wayne Denton spoke slowly and carefully to the glamorous blonde on his computer screen. Everything they said to each other had to be painstakingly repeated by a translator – and each minute was costing Wayne money.

Unbeknown to the dad-of-two, in just a few months this beautiful Ukrainian stranger, who was almost half his age, would be his bride. Since splitting up with his wife, Wayne, 55, who has two sons, Richard, 22, and Daniel, 13, had been on plenty of dates with women his own age, but never found lasting love.

“I sang Neil Diamond’s ‘Hello Again’ and one of the judges said that I had a great Neil Diamond voice.

“I got through to the final but as I sang an original song I didn’t win the show,” says Wayne.

Afterwards he forged a successful career, working on cruise ships as a singer and agent, but as a single man in the entertainment industry he ended up going from one girl to the next, following his divorce in 1997.

“I had a few short-lived relationships. They would move in and then move out. It wasn’t all the girls’ fault.

“I blame myself, too, especially since I was away a lot with work. I got very lonely coming back to an empty house.”

So Wayne decided to try online dating on UK websites and went on lots of dates with women his own age.

“But the spark simply wasn’t there. I am used to being around young people in my business and I am very young at heart.

“A friend then said to me ‘You’ll end up with a young Thai bride or something.’

“At first I thought ‘No, of course I wouldn’t,’ but then I thought, ‘There’s no harm in looking abroad’.”

“Apparently, one in five of their dates ends up in relationships and all the girls were vetted, so I felt like I was in safe hands.

“I clicked on Ukraine and saw one profile that stood out like a flashing light.

“Her name was Iuliia. She was 29, a mum of one and absolutely stunning. So I sent her an email and soon we started to converse.”

Wayne had to pay to send her a message and to read emails she sent him.

If he wanted to see any pictures she sent, he had to pay for them as well.

Wayne had a niggling doubt that it could all be a scam.

But Wayne got the proof he needed when the agency offered a video date service.

“It cost £30 for 10 minutes but I thought ‘What the heck!’ The first time we spoke online I was so excited.

“She was very beautiful, with massive blue eyes, but it was frustrating because she didn’t speak any English and we had to use a translator.

“The 10 minutes turned into 40 minutes, which was expensive.

“Iuliia told me she had an eight-year-old daughter, Mylana, and that she had split from the father about two years before.

“She was nervous using a dating site because there was a history of Ukrainian women ending up as prostitutes when they met Western men.”

In fact, Wayne was the first man that Iuliia met from the site.

“I was worried at first, but my friend who worked at the agency reassured me,” says Iuliia, who now speaks fluent English.

“I’d had a lot of emails from different men, but I never met any of them.

“Wayne stood out. His photo was handsome and he had beautiful eyes.”

Wayne was smitten, but he still had his doubts.

“You can’t help thinking, ‘Why does this girl like me? Maybe she wants a passport or money’

“When I brought up the age gap between us, Iuliia reassured me that most of the girls in the Ukraine on these sites are looking for a stable and happy relationship, so age isn’t an issue with them.”

After two months and £500 spent talking to Iuliia online, Wayne decided to meet her and flew to her home city of Mariupol in October 2010.

Iuliia took time off from her job as an interior designer.

“She met me at the airport and I fell in love straight away,” says Wayne.

Iuliia adds: “We spent nearly 24 hours together every day for 10 days. It was so romantic. I knew he was the one.”

Wayne set Iuliia up with a Skype account and a laptop and paid for her to have some English lessons.

He says: “It was with a heavy heart that I left her but we arranged to meet again. My work schedule made it hard to plan, though.”

That Christmas, Wayne told Iuliia he wouldn’t be able to see her because of family commitments.

Instead, he arranged for her to be taken by friends to an expensive karaoke restaurant.

“I got the people at the restaurant to tell Iuliia there was a message from me.

“When the music started, I walked out with a bunch of roses and sang Neil Diamond’s ‘Hello Again’. She was so emotional she cried.”

Iuliia didn’t even know who Neil Diamond was at the time.

“When I heard what I thought was a CD message I was crying already,” she says.

“Then I saw my Wayne and I couldn’t believe it. I cried a lot.”

It was at the end of that second visit that Wayne proposed and Iuliia accepted.

“I knew she was genuine and that she was in love with me and that’s all that mattered, regardless of what people thought.”

The next step was to start the visa application process, so that Iuliia could come to the UK.

But, while Wayne hadn’t kept his romance a secret from family and friends, when he told them he was now engaged, not all of them were delighted.

“They all thought I was bonkers meeting Iuliia, let alone marrying her.

“They all said ‘What if it doesn’t work out?’ I thought I could meet someone in the town next to me and it might not work,” says Wayne.

In March 2011, they married in the Ukraine, surrounded by Iuliia’s friends and family and some of Wayne’s.

“We had the civil ceremony in a restaurant, which is like a registry office, and a month later we had the reception and the celebration,” says Wayne.

They went to Thailand for their honeymoon and because Iuliia’s wages barely stretched to anything, Wayne footed the £2,000 bill.

In July last year, Iuliia was granted a spouse visa and Mylana followed her.

“When Iuliia arrived, she couldn’t believe that there was so much countryside. She asked where all the houses were!” says Wayne.

“What struck me most was the clean, fresh air,” says Iuliia.

“Back home the air is smoggy from all the factories.

“When I saw our home, I was overwhelmed – a four-bedroomed detached house with its own garden and a collie dog.

“One of my favourite things in all the world is having coffee in our own garden with Wayne.”

Next year she will have extend her visa for 12 months. After that she can apply for citizenship.

She has no regrets about leaving the Ukraine.

“I wanted a man to grow old with,” she says. “It didn’t matter to me what country he was from.

“I wanted him to have a good heart and that is Wayne.

“Both me and Mylana have settled in now and Wayne’s like a father to her. She’s even got two older brothers to look out for her.

“I love England, the polite people and chicken tikka!

“I do get homesick, especially when Wayne is away, but I hope to become a translator and possibly do modelling.”

Wayne spent a small fortune on meeting, wooing and then marrying Iuliia.

He says: “All in all, after the website subscription, eight flights to the Ukraine, the wedding and reception, and visas, I must have spent about 12 grand, but I think that’s the best money I have ever spent.”(Source: UK Mirror)

A man can go to any length to please a woman he’s in love with.

That is the power of love.