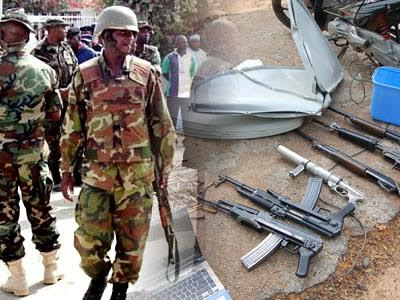 Seven persons, including a soldier, were killed in a gun battle between the Joint Task Force (JTF) and suspected Boko Haram elements in Kano in the early hours of yesterday.

The dead soldier was said to be from the 3rd Brigade of the Nigeria Army, Kano.  Six members of the sect were killed in the confrontation, which took place in the Sheka quarters of the ancient city. Several injured persons were taken to the hospital.

JTF spokesman, Capt. Ikedichi Iweha, said the operation was carried out at about 4.30am following some arrests made by the JTF in Mariri quarters which led to the discovery of the Boko Haram hideout.  Following the gun battle, the building was demolished and some dangerous weapons recovered.

He also said that five women and three toddlers, who are believed to be families of some of the men, were rescued during the operation.  None of them was hurt.

“We engaged the terrorists in a gun duel which lasted for some hours,” he said. ‘On our arrival to the house, they immediately opened fire, but our superior fire power subdued them, which resulted in killing of their six members while a soldier later died of a gun wound in the hospital. We were able to rescue five women and three toddlers of which none of them was hurt during the raid.”

The recovered items include 2 AK-47 rifles, 150 ammunitions, some explosives and five magazines.

Barely twelve days ago, on Easter Sunday, a soldier and 14 other Boko Haram members were killed in another JTF–Boko Haram gun battle in Kano. Fourteen AK-47 rifles and explosives were recovered, while the sect’s building was razed to the ground.
[By Sahara Reporter, New York]