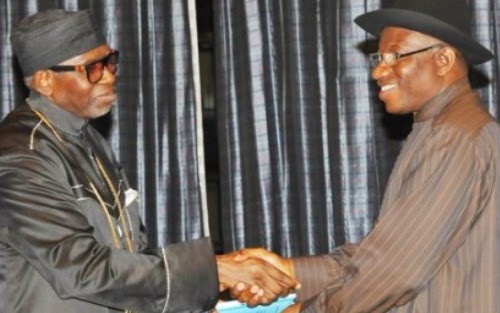 Pastor Oritsejafor presided over Monday’s meeting, held at the National Christian Center in Abuja. A source at the meeting said the atmosphere was often contentious as some leaders of CAN’s state chapters in attendance expressed skepticism over their national leader’s explanation of the whole weapons-running affair. Mr. Oritsejafor has faced growing criticism from people who wonder how and why the CAN president’s private jet ended up being involved in an operation a cash-for-weapons scheme.

During the meeting and in a prepared statement sent to media houses Pastor Oritsejafor, a close confidant of President Goodluck Jonathan, spoke defiantly and denied any involvement in smuggling cash to South Africa for illicit arms purchase.

He admitted full ownership of the jet, a confession he initially avoided, claiming he was only a fractional owner of the company that owns the jet.

He further stated that, in order to help with the cost of operating the private jet, he had placed it with the Green Coast Produce Company on lease. He added that it was the leasing company that had given the jet to the individuals who used it to transfer cash to South Africa. South African authorities said two yet-to-be identified Nigerians and an Israeli citizen accompanied the jet when it landed in their country.

In addition to denying responsibility for the smuggled cash and the arms purchase deal, the CAN leader accused some elements bent on dividing Nigerian Christians of fanning the embers of the controversy.

“It is clear that those who manipulated this conspiracy desire to create a schism in the church,” Mr. Oritsejafor said, adding that “the media hype and the deliberate distortion of information that followed it confirmed that forces that desperately desire to cause division and disunity in the church are at work. Even the devil knows that a house that is divided cannot stand.”

Late today, two participants at the executive meeting spoke to SaharaReporters. One said CAN’s embattled national president tried to “explain his side of the issue and to mobilize us to support him,” but added “many participants were tactful in their contributions.”

The other participant disclosed that the meeting resolved that there was a need for thorough investigation to ascertain all the facts regarding the cash found in Mr. Oritsejafor’s jet.

Several other senior clergy who attended the meeting refused to comment.

SaharaReporters first exposed Mr. Oritsejafor as the owner of the plane used in the illicit cash transport. Since our disclosure, the CAN chairman has come under scrutiny from Nigerians, some of them urging his arrest and investigation. A group based in Warri has threatened to commence public protests if, by October 1, the Federal Government failed to arrest Mr. Oritsejafor. The group said the march, which would also focus on youth unemployment, would start from the Airport Junction to the Hausa Quarters in Warri, Delta State.

In turn, Mr. Oritsejafor has doggedly used CAN to deflect the scrutiny. In comments at today’s meeting, he said, “As Christians, we need unity in the church now more than ever. We are witnessing inhuman attacks by religious extremists against Christians in the northern part of the country, while Christian infrastructure is being destroyed in their hundreds.” He warned other CAN members not to “permit the enemy to divide us.” He added: “Distinguished leaders of the church, please permit me to state clearly before God and before all of you here present today, that I am not a party to the movement of $9.3 million from Nigeria to South Africa to purchase arms and ammunition. I am not part of the deal. I know nothing about it.”

Continue Reading
You may also like...
Related Topics:money, Oritsejafor, weapon