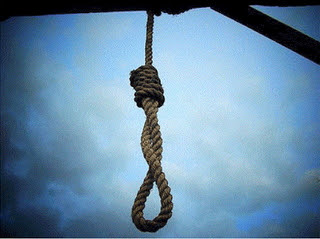 A young man in his late twenty living at Umuobe village, Ovom 1 and a graduate of Abia State Polytechnic, Aba, has allegedly committed suicide by hanging himself with a rope in his family house.

According to the reports, the man whose name was yet to be ascertained allegedly killed himself on Sunday after attending a church service in one of the Catholic Church in the area.

The young man who was said to be an orphan, The Nation was told, would be among the next set of graduates that would be shortlisted for the compulsory one National Youth Service Scheme.

Until his death, many who knew him said that he was doing tiling job and was feeding well as he has customers and was making a lot of income from the business.

They however said that they were yet to point out the reason why he should end his life through such a deadly mission on that fateful Sunday.

Though the family members were yet to be reached, a source in the area who confirmed the incident said; “he returned from church on Sunday after attending one of the church services and nobody suspected that such a thing was going to happen. It was around 5pm that the bad news broke.

“The mother and the dad we learnt are all dead. I think he is the breadwinner of the family. It is very unfortunate. We learnt that he will be among the people that will be going for NYSC soon because he schooled in Abia poly. We are yet to understand how the incident happened. The boy has a handwork which was fetching him money, so I don’t think that it was hunger or out of frustration that led him into such action. I learnt his girl friend and a few other persons were around, though I learnt that the girl friend was said to be in the kitchen when the incident happened.

“According to the people of the area, the incident is a sacrilege and that they have to perform some rituals before his body could be touched and buried. So, it was on Monday that they (villagers) after performing the rituals took away his corpse from the room where it was lying,” the source stated.

The source said that fiancé to the deceased was later invited to the Azuka Police station in whose jurisdiction the incident happened.

But when contacted, the Abia State Police Commissioner, CP Joshiak Habila who confirmed the incident said that the matter was yet to be officially reported to the police.