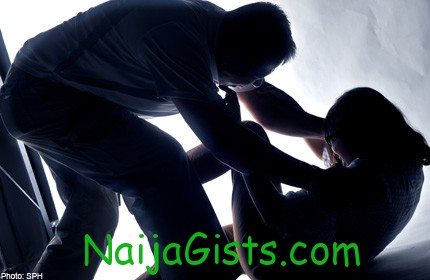 A man by the name of Emmanuel Okon Akpan who hails from a local government Area of Cross River State, South South has impregnated his father’s wife. naijagists.com

This shocking occurence shocked residents of the area when he engaged in a face off with his father for allegedly snatching the old man’s wife, Agnes Akpan.

How It All Started

The trouble appears to have reached a point of no reconciliation as the young man has also impregnated the woman, claiming he so much loves her.

The man, who is currently in detention at the Federal Housing Police Station, is to explain to the police what relationship he has with his father’s wife that has culminated in pregnancy.

The man was heard at the police station lamenting that his first son Emmanuel “has snatched my wife that I just married not long ago.”

Mr. Akpan said he is a widower who lost his first wife some years ago, and had been single until recently when he decided to marry Agnes in order to have someone to assist him wash his clothes and prepare his meals.

He told the Investigation Police Officers (IPO) at the Federal Housing Police Station that he had not savoured the warmth of his newly married wife up to a year when he suddenly suspected that his son was having affairs with her.

“What culminated in the pregnancy started when the boy started courting my wife with gifts, wears and money, telling her that he was ready to take good care of her and the lady fell for him.”

He said after his son swept the lady’s heart, she started avoiding him.

“She was always in my son’s one room apartment, even at odd times of the night.”

The son, who did not deny having carnal knowledge of his father’s wife, claimed that while his father was in the process of bringing Agnes home, he thought the man was engaging the lady for him.

“Since she is a young lady I thought my father may be unable to satisfy her sexually,” he added.

Agnes and the son were alleged to have started calling Mr. Akpan an old man, claiming the man was disturbing their life. This prompted the man to report to the police.

Sources said the man went berserk recently, after realizing that his wife was pregnant for his son; threatening to kill both of them.

Some family members who said they did not want the face-off to result in bloodshed later intervened.