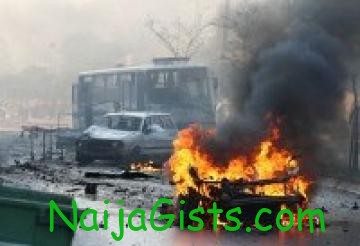 Another massive bomb blast has hit the building of Gombe State University. This bomb explosion erupted yesterday night by a gang of 8 armed men suspected to be members of Boko Haram members. naijagists.com

According to a student who witnessed the blast, the attackers beat the security network at the gate and entered into the university premises.

They were said to be inside two vehicles and they came at about 9 p.m.

The source added that the men numbering about eight and well armed parked their vehicles in the institution’s premises. Thereafter they walked straight to the senate building and began shooting.

It was gathered that after bombing the senate building, the armed men shot indiscriminately at Gombe town while fleeing the area, to scare security operatives.