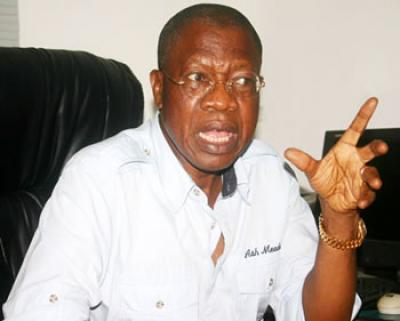 We recently reports the latest attack by Boko Haram in Damaturu, Yobe State that claims over 60 lives

Now, the Action Congress of Nigeria (ACN) has said it is horrified by the scale of the terror attacks carried out by suspected Boko Haram insurgents on Friday, and noted that it is time for security chiefs to toe the path of honour by resigning or being kicked out.

In a statement issued in Lagos, on Sunday, by its National Publicity Secretary, Alhaji Lai Mohammed, the party said it is apparent that those saddled with ensuring the security of lives and property in the country are grossly incapable of doing so, hence the need to shake up the security agencies and put more capable men and women in charge.

”The shake-up must not spare any of the security chiefs. This is about taking responsibility. After all, they have consistently assured the nation they are capable of stopping these deadly attacks, which have now grown in number and ferocity,” the statement read.

ACN said for a country not at war, the death of 53 people is enough reason for any President to be concerned enough to take urgent action to rectify the situation.

The party slammed the President’s “spin doctors” for saying he cancelled his trip to Bayelsa for a family wedding in view of the attacks, saying that was not what Nigerians want to hear at this point.

”The President’s spin doctors are so unimaginative. Why do they think Nigerians are more interested in whether or not he cancelled his social trip than in what the President is doing to stop this carnage?

”In other climes, the President would have gone ahead to address his compatriots to reassure them that the government is still capable of protecting them, instead of merely telling them he cannot make a social trip,” the party said.

The ACN warned the government not to think it can use force to defeat those behind these heinous acts, adding that a more imaginative solution must be fashioned out to save the lives of innocent Nigerians and the security agents who are daily being mowed down by Boko Haram.

The party said the government must have a rethink on why what it initially considered a ragtag group is now carrying out sophisticated and well coordinated attacks, in addition to spreading its attacks beyond Maiduguri.

”The government must also consider the possibility that the whole crisis may have been hijacked by other groups.

”And since it seems the government has now run out of ideas on how to tackle this crisis, we hereby repeat our earlier suggestion that the President should call a stakeholders’ meeting to help find a way out of the quagmire the country has been thrown into,” the party said.