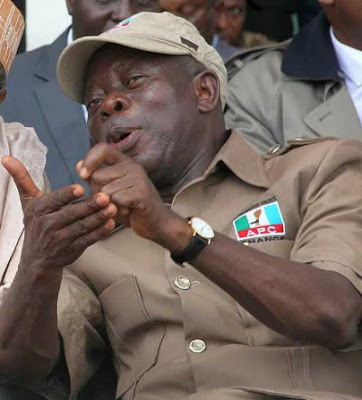 Oshiomhole stated this during the first late Samuel Osaigbovo Ogbebmudia Memorial lecture titled: “Nation Building and Development in Nigeria,” organised by the University of Abuja on Thursday.

He said the elites who supervised the restructuring of Nigeria from three regions to 37 states are responsible for the problems in the country.

He said the military men having ruled and superintended over Nigeria for more than three decades, now in civilian uniforms are going about criticizing governments.

“Once our elites are out of government, they bring down the bridges of government. Our old elites have no right having messed up yesterday.”

“The task of nation building must not be compromised by our elites who have benefited from Nigeria through education and more.

“These old men have no right, having messed up your yesterday and responsible for the confusion of today, they have no right to divert your attention to a feasible Nigeria for posterity.”

He said Nigerians are united by poverty.

Oshiomhole, who also flayed calls for Nigeria’s restructuring said “we only need to restructure and redistribute wealth in our country.”