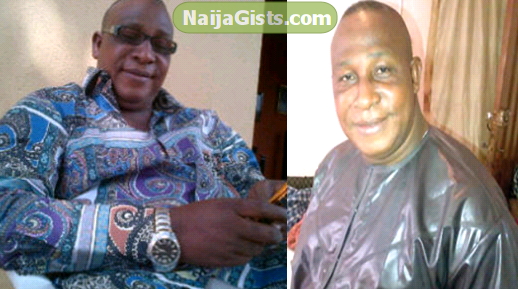 Adebayo Salami, a.k.a Oga Bello, has been on stage for 49 years. Not once has he given retirement a thought. What’s his staying power? This and more he talks about in this interview

How did you come to be known as Oga Bello?

That was in 1969 when we (Ojo Ladipo Theatre) were running a programme on NTA. It was entitled, ‘Bar Beach Show.’ It was a variety show and we had a 15-minute comedy sketch. Ojo Ladipo played the role of a comedian, Mama Awero was the society lady and I played the role of Bello, an office executive and that name stuck.

What gingered your interest in acting?

I used to watch a programme entitled, ‘Village Doctor.’ That motivated me to acting. I started acting with Young Stars Concert Party in 1964 when I was 12 years old. The group metamorphosed to Ojo Ladipo Theatre. I was in school when I joined them. My parents were not interested in the path I had chosen and they went as far as threatening to curse me. I left home and lived with a friend who had a church until my parents came for me.

You no longer appear on stage productions…

I love stage productions but in the last 15 years, I have not been active on stage.  Unfortunately, film and celluloid have taken over. I am working on a stage production currently.

You worked with Ojo Ladipo, an industry pioneer…

I was with him until he died in 1978. There was discipline unlike now when actors lack self control. He discovered my talent and I later became his assistant. I was able to take charge of the group after he died. Under his tutelage, I was able to develop myself. When I joined the Federal Ministry of Works and Housing in 1970, I spent my first salary and bicycle allowance on printing movie posters.

You combined acting with being a civil servant?

I started acting as a student and later, as a civil servant. I joined the civil service in as a library assistant in 1970 and resigned in 1974. Later, I was appointed as personal assistant to the then Minister of Works and Housing, Alhaji Femi Okunnu. Then, they were known as federal commissioners. When he was leaving office in 1974, he asked me to resign and go with him and I did. He set up his law chambers and I was with him until 1976. Even while I was working with him, I was still acting and he contributed a lot to my life as an actor and to the development of Ojo Ladipo Theatre. In 1976, I resigned for full time acting.

When did you get your first big break?

In 1970. It was a stage production at the Lagos State Festival of Arts. I played a lead role in a play called Ogbon Gbemiga and we won the first prize.

How much did you charge for a role then?

Then, the industry was not what it is now. We did not even think about money but loved to act.

The truth is I don’t get invited. I don’t know whether my spoken English is not good enough for them. In the past, I took part in an English movie for Wale Adenuga. If I am invited, I will oblige but I will never lobby. I even prefer to be recognised with the Yoruba movie industry because that is the cradle of the industry in Nigeria.

When did you become a producer?

So far, I have produced about 17 films. From the outset, I had loved to be a producer and usually, I write my stories myself. The first movie I produced was Ogun Ajaiye under the stable of Awada Kerikeri in 1985. In 1987, I produced Omo Orukan and in 1989, Eri Okan and all of these were on celluloid. I joined the home video industry reluctantly because I knew it was not accepted internationally. Unfortunately, the economy was not stable and there were no equipment to produce films in Nigeria.

Which gives you more fulfilment; being a producer or an actor?

A producer. I am better fulfilled when I am able to interpret my scripts. I conceived it, wrote it and I believe nobody can interpret it better than myself.

Do you think of retiring soon?

An artiste does not retire. If you have a talent like mine and you don’t put it to use, it will haunt you. Instead of retiring, you move with the times. I am going to keep acting for as long as I live.

What has been your staying power in 49 years of acting?

God’s grace. Individually, we are on earth for a purpose and God has sent me to minister to people using this medium. Secondly, I am hardworking and have been able to endure. I am honest in my dealings and also focused.

Did you raise any objections when your children began to join the industry?

There is Femi, Sodiq, Tope and Rilwan. Sodiq is a production manager and producer. Tope is a director, producer and writer. Femi is an actor and writer, Rilwan is a production editor. I never called any of them to act and did not insist that they join the movie industry. As a responsible father, all I owe them is good and quality education. They are graduates and I didn’t force them to do any course. When Femi, who is a lawyer, decided to act, I gave him my blessings. Sodiq is a geologist; Tope and Rilwan computer scientists. In fact, when they joined the industry, I was relieved because I won’t have to start looking for white collar jobs for them after graduation.

When the fame came, how did you handle it?

I was unable to handle it because it came unannounced. Youthful exuberance did not help matters either. I made mistakes but I have been able to correct them. I thank God.

How will you describe yourself as a father and husband?

I am responsible and I care for my wives and children.

Please let’s leave the number of wives. I don’t want to talk about that.

I met my first wife while in the secondary school and I met the second through my younger sister.

I was born in Agege, Lagos but I did not live with my parents. They took me to Okepopo, Lagos Island, where I was brought up. I went to Ansarudeen School, Okepopo but I did not enjoy the privilege of a university education. There was no money but I trained myself. I managed to go to Adebodun Commercial School. Later I joined Lagos Drama School which was then affiliated to the University of Lagos.

Aside acting and producing, what other things do you do for a living?

I am an actor and producer by profession and that is what puts food on my table. Except you are cutting corners, the industry is bound to keep you busy such that there is little or no time left for other businesses.

I like listening to music. I listen to apala, sakara and Fuji

I like to wear simple outfits. You have not seen me in a suit because there is no reason for me to put on one. I have them, I just don’t wear them. I can’t even remember when last I put on a suit. I am an African man and I like to celebrate my culture.

How do you keep fit?

My mind is at peace. I have trained my children (I have 15 graduates and two undergraduates). This means that I have planned for my old age.

My good works. The legacy I leave for people in terms of the interpretation of my movies.

Have there been times when you felt like quitting the industry?

Yes, after Baba Mero died. Again, we lost his first wife. I felt like quitting because I thought that was how we all were going to die one after the other! There were rumours that I killed Baba Mero. It was the late Baba Hubert Ogunde who called me and said success comes with lots of challenges and I should develop a thick skin. Thank God, I have allowed sleeping dogs lie.