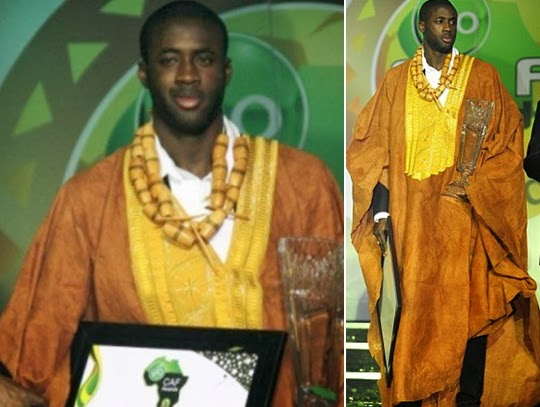 On Monday, the talented footballer was named BBC’s African Footballer of the year 2013.

Since 2008, he has been shortlisted for the BBC Award and this year, he made it.

Toure, who has scored 13 goals for his club and country this year, was the choice of the BBC’s global audience.

He held off competition from Pierre-Emerick Aubameyang (Gabon and Borussia Dortmund), Victor Moses (Nigeria and Liverpool, on loan from Chelsea), John Obi Mikel (Nigeria and Chelsea), and Jonathan Pitroipa (Burkina Faso and Rennes).

We are pleased for Yaya Toure that he has finally won the BBC African Footballer of the Year on his fifth nomination for the award,” said BBC Africa’s current affairs editor Vera Kwakofi.

“This shows the high esteem in which he is held by lovers of African football and the respect the fans have for his exploits for club and country.”

Toure now has the chance to complete an awards double having been selected among a 25-man shortlist for the African Football Confederation (CAF) African Footballer of the Year for 2013.

I love his Agbada and the traditional African bead.