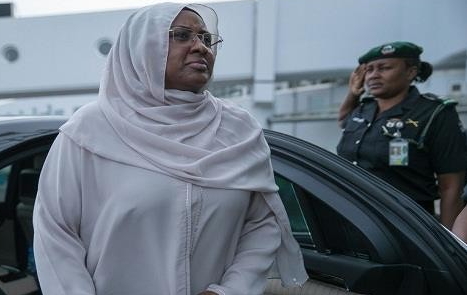 First Lady Aisha Buhari, who was in Adamawa when the news of her son’s bike crash came, collapsed and had to be placed on bed rest at Cedacrest Hospital, Abuja.

Yusuf Buhari, had a bike crash Tuesday night, around Gwarimpa in the Federal Capital Territory, Abuja and broke his head and one of his limbs. Before the scary incident, he was reportedly trying to overtake his friend when he suddenly skidded off the road and, in the process, hit his head and limb on the hard surface. He lay there unconscious for a while before being rushed to the hospital.

A family source said that the First Lady was immediately alerted and had to rush back from Adamawa. But a top government source disclosed that on getting to Cedacrest Hospital, Abuja, she was prevented from seeing her son because of the severity of the accident. That led her to conclude that he had died, and collapsed and had to be revived and placed on bed rest.

Security remains tight inside and around Ceda-Crest Hospital where the First Lady and her injured son,Yusuf are on admission.

Continue Reading
You may also like...
Related Topics:aisha, Buhari