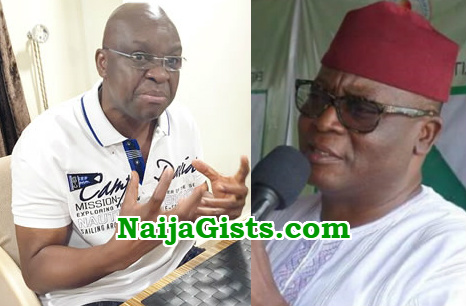 A governorship aspirant in Ekiti state chapter of the Peoples Democratic party, Prince Dayo Adeyeye has called out Ekiti governor Ayo Fayose for harassing PDP members and preventing them from accepting Christmas/New Year largesse from party leaders who do not belong to his camp.

The immediate past National Publicity Secretary of the party added that Fayose has become a Pharaoh in Ekiti because he has blocked PDP party members in his camp from participating in party activities.

He urged PDP leaders to intervene to Fayose’s alleged dictatorial tendencies which could force members to join the ruling party.

Continue Reading
You may also like...
Related Topics:dictator, ekiti, fayose