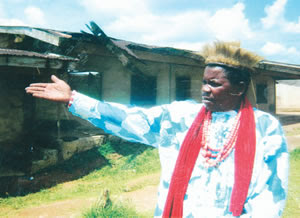 Nduche, who commenced the strike on June 15, 2013, said he went on the hunger strike at risk to his life because of the love for his community.

He said if he survived within the three-month period, it would be nice, but if he died in the process, posterity would know there was a leader who laid his life for his community’s development.

Nduche explained that the school serves over 2,000 students from Ikot Ubo and other neighbouring communities.

He said, “We are not happy that the only secondary school in our domain has been neglected by successive governments, including the present government in the state, which claimed to have spent much money on school renovation.

“I can’t endure this type of abnormality any longer. If I die during the hunger strike, it will be all right, but if I survive it, it will also be all right; but all we are asking for is equity and fair-play. This government cannot tell us that this school which was built in 1982 is not old enough to warrant repairs.”

“Our children and teachers daily give report of snakes chasing them out of classes. If you look inside you will see that grass is almost as tall as we. You can see the fallen roofs everywhere. Yet, if you go to most parts of the state, you can’t see something like this.”

Nduche, who is also the Chairman, Akwa Ibom State Conference of Village Heads in Nsit Ubium, stated that the village voted massively for Governor Godswill Akpabio and the Peoples Democratic Party but wondered why the administration had abandoned the community.

An native, Theresa Okon, said the community, staff and the students of the school, were always imploring Akpabio to come to their rescue.

“Buildings in the school are leaking; walls have cracked and falling. There are no seats for students and staff. There are no toilets and no assembly hall,” he said.