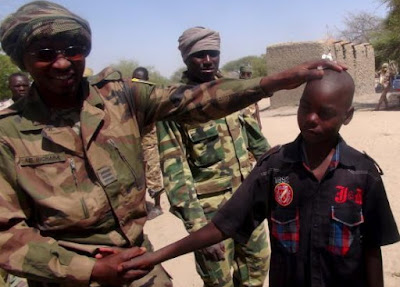 Our Chibok Girls are missing since April 15, 2014. We await the release of the remaining Dapchi girl-child, 14-year old, Leah Sharibu. We hear of talks with the other killer groups and amnesty ‘a la Niger Delta’.’ Is it possible that one day we Nigerians will again be free of fear, but at what cost to the threadbare treasury, left empty by the PDP and neo-APC mutants manifest by the PDP finally rendering a ‘nonspecific all embracing’ apology without facts or ‘pay-back schedule’? And is the APC innocent of ravaging Lagos and other states? And for how long will terrorists who perhaps temporarily ‘down AK47 tools’ be undeserving recipients of funds needed for 2.5+ million citizens in IDP camps?

The amnesty raises a paradox. In the Niger Delta case, there was the citizen protectionist ideology of resistance to oil companies, the NNPC and unitary federal government which left the oil-bearing states wastelands. The Niger Delta targeted the ‘enemy’ – the Federal Government and oil companies. However todays’ terrorists have their ideology targeted directly ‘at the citizenry’ as an ‘anti-education, anti-development agenda’. They kidnap thousands and strap suicide vests on other people’s children, especially girls.

By the same logic Fulani cow owners, or someone, has instilled in Fulani herdsmen and their protective militia, a driving ‘divine right‘ ideology of ‘’cow first’’ and ‘’free feeding’’ and ‘all Nigeria belongs to us’.

Both Boko Haram and Fulani herdsmen and their string-pullers have targeted ideology at citizens as ‘enemy’ and invade the farms of the highest, execute monarchs, soldiers and policemen seeking to ‘teach a terror lesson’. This makes all citizen targets.

And under amnesty what is their intended reward for participating in the massive murder of citizens who by the way got no support and little or no compensation for being victims? Perhaps lifetime salaries for murderers like for National Assembly (NASS) leadership. Some of us hold the view that the Niger Delta blanket amnesty, without a truth commission, admission of guilt and some apology was self-defeating, and encouraged other ethnic groups to apply. And now we have come full circle as the financial tap will again be opened for Boko Haram to reap where they sowed suicide bombs and the Fulani herdsmen rampaged.

Please note that the long bridge at the Lagos-Ibadan Expressway origin near the cow market is now a murderers’ den for victims’ broken down vehicles. If police cannot places patrols there, government must mount barbed wire to make the under-bridge area less porous. Recently a gentleman had his hand almost cut off by a machete cut aimed at his head.

Petroleum Industry Governance Bill (PIGB) passes through NASS, 5-10 years late? The federal government’s 2018 budget is still struggling to live. It is now renamed a ‘Premature 2019 budget’, or is it an abortion carried out by NASS!!

The hollow ‘empty barrel’ apology, ‘full of sound and fury signifying nothing’, should be by parties in whatever power anywhere. Too few were credible and which one did not use thuggery and rig elections. But apologies are rubbish without a catalogue of the woes and a restitution particularly of what is left of their amassed massive loot to the public treasury. Rigged elections, budget thefts, anti-democratic decisions must stop in 2019 in favour of honest violence and thug-free elections.

All hail the Ikeja Branch of the Lagos NBA. Other professional bodies should sign with them. No matter the good intentions of government, it must subject itself to scrutiny and exorbitant un-negotiated fees are counterproductive to re-election in 2019. The people have had their earnings halved in buying power and deserve defenders from the politicians’ ambitions for ‘trillion naira economies’ creating local post-colonial slavery. Politicians parade as consumptive parasites, running homes and offices ‘free’ on generators and 50-100/litres /day diesel, paid by budgets though the citizen cannot afford similar electric power substitution for their families. Can Nigeria’s political leadership forget the generator for one year and remember when they last bought fuel and serviced a generator with their own money. We do it daily!

We booed Gowon and others for blocking Lagos roads for hours during state visits. And 40 years on, no lessons learnt. Shame!!!

Ivory Coast’s electricity company – Compagnie Ivoirienne d’ Electricité (CIE) has a drone school to facilitate monitoring power grids with options for road transport monitoring, security, river flows and medical services. Will Nigeria, as usual be late to this developmental technology and its introduction to help achieve the SDGs 1-17. The drone is a very cheap, locally-controlled satellite. Nigeria ignored developing its power grid for 50 years and its telephone system until the citizens were rescued by the cell phone. Will Nigeria be late to the drone dining table? Having seen the rubbish schools of Science and Technology best exemplified by the TV photos of the Dapchi school and seen the dilapidated tertiary science facilities and deficient curricular offered by colleges, polytechnics and universities.

Meanwhile the world buries Stephen Hawking, cosmologist, science populist theoretical physicist, black hole expert, with Sir Isaac Newton. Nigerians parents should teach their children about him and scientists should teach and demand ‘Hawking Essays’ from all their university students. But will they? Probably not! Happy Easter Period.

Continue Reading
You may also like...
Related Topics:Amnesty, boko haram