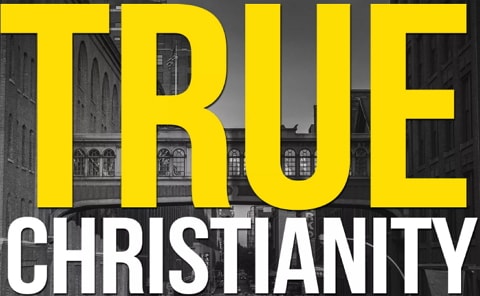 Armed robbers attacked me on Lagos airport road and an anonymous Good Samaritan came to my rescue. I soon discovered this Good Samaritan was Jesus, someone I had previously gone to great lengths to avoid. It became imperative for me to get to know all I could about him; the better to lay hold of that for which he laid hold of me.

But there was a catch. Once I identified my saviour as Jesus, I was immediately thrust into an intensive spiritual warfare. I started having a recurring nightmare that nearly scared me to death. There was a mean-looking man in a hood who was out to get me. Every so often, I found myself on the run for my life from him.

Until one day, I discovered the true identity of my “stubborn-pursuer.” The Lord himself showed me his face. I could not believe my eyes. The killer after my life was Jesus Christ, my Saviour.

This brings to mind the experience of Moses: “It came to pass on the way, at the encampment, that the Lord met him and sought to kill him.” (Exodus 4:24).

I thought Jesus came to save my life from robbers, only to discover he too had his own agenda. The robbers made away with my possessions; but my saviour was determined to take something even more precious from me. He wanted to take my life.

Jesus says: “The thief comes only to steal and kill and destroy; I have come that they may have life, and have it to the full.” (John 10:10). That means in order to receive the life Jesus was determined to give me, I had to relinquish my life.

In short order, my saviour became my adversary. I discovered Jesus, my saviour, was not interested in saving the life I lived. Instead, he was bent on jeopardising it. Accepting his offer of salvation would mean my life was over. Therefore, I was confronted again with uncomfortable choices, similar to the ones I faced with the armed robbers. I could either fight to the last to save my life from my saviour, or I could surrender and allow my saviour to take my life.

But Jesus warns: “Whoever desires to save his life will lose it, but whoever loses his life for my sake will find it. For what profit is it to a man if he gains the whole world, and loses his own soul? Or what will a man give in exchange for his soul?” (Matthew 16:25).

The Lord’s answer gave me the shock of my life. He said: “I asked him that, Femi, because sickness was his life.” I was not sure I heard the Lord correctly. “What did you say?” His reply was emphatic: “I said sickness was his life. He had known nothing but sickness. He did not know what it means to be well. To save him, I have to save him from his life. I have to save him from the only life he knows and that life is a life of sickness.”

“But how can a man be saved from his life? I thought men are saved from death.” The Lord replied with a kingdom dynamic that completely transformed my life: “No Femi,” he said, “I save from life. That is the reason why I kill before I make alive. I kill the lives of men.”

When a man has to be saved from his own life, there is inevitably a problem. He is confronted with death. Salvation from life requires death. Without death there can be no salvation. And so the Lord kills before he makes alive.

But are we prepared to face death? Is self-preservation not a basic human instinct? It might be human but it is not divine. Jesus laid down his life, leaving us an example to follow.

Beloved, understand this and internalise it. True Christianity is a death sentence. A true Christian dies in order to live. We are delivered from counterfeit life to substantive life.

The new life Jesus offered me involved working with him as a menial fisherman. But I was not interested in fisheries. As a matter of fact, I was contemptuous of fishermen. They are poorly paid and have low social status. I obtained a doctorate from Oxford University, England so I could do something better with my life.

But had it not been for my Good Samaritan, I would be dead. How then could I refuse to work for him in whatever capacity he chose? What if he were to withdraw his protection? Would I not soon be at the mercy of armed-robbers again?

I had to make a choice but clearly my personal agenda was not an option. I either had to risk premature death at the hand of robbers, or forgo my grandiose life-long plans and become a destitute fisherman.

Be careful before you sign that life-insurance policy with Jesus Christ. There is a lot of fine print in it. Read it properly because you would be signing away your life. Once signed, there is no going back. After you put forward your claim, then you will be shown all sorts of clauses you were not aware of beforehand. You will need a magnifying glass to read some of them.

Solomon gave us due warning: “Do not be rash with your mouth, and let not your heart utter anything hastily before God. For God is in heaven, and you on earth; therefore let your words be few” (Ecclesiastes 5:2).

But often, the Holy Spirit is the one who inspires our prayers, and we just go ahead sheepishly without realising we are praying our life away. TO BE CONTINUED.

Lagos In Chains For Buhari
Amnesty For Boko Haram Terrorists: An Insult To Our Intelligence