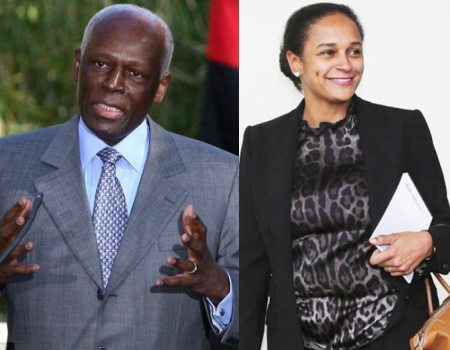 Jose Eduardo dos Santos, the President of Angola has named his billionaire daughter Isabel to head the state oil firm Sonangol, according to a government statement published late Thursday.

He appointed the 43-year-old Isabel dos Santos chairwoman of a new board of directors of Sonangol, after sacking the previous board last month.
Isabel dos Santos has been ranked by Forbes magazine as the richest woman on the continent.

Critics say she amassed her vast fortunes thanks to the backing of her father who has ruled Angola for 35 years.

In a statement Friday Isabel dos Santos vowed that the new Sonangol board “will work to decrease production costs and optimise resources in order to increase the international competitiveness of the Angolan oil sector”.

The eldest daughter of the Angolan leader, she is nicknamed the “Princess” and is ranked Africa’s eighth wealthiest by Forbes magazine after building a vast business empire.
She grew up in London, where she studied mechanical and electrical engineering at King’s College. Her first business venture was a restaurant, Miami Beach, which she opened as a 24-year-old in Luanda.

Her wealth is estimated at $3.3 billion.

The mother of three holds a quarter of the shares in Angola’s mobile phone company Unitel and a significant stake of Angola’s Banco BIC.

She also controls 19 percent of Portugal’s fourth-biggest bank BPI and has bought shares in several Portuguese companies in recent years, including a cable television firm.

Isabel dos Santos has recently spread her banking empire into neighbouring Namibia, after a banking licence was approved by the country’s central bank.