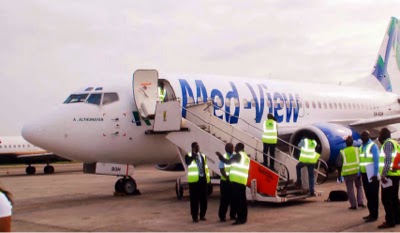 A Medview Airline flight from Lagos to Yola was on Tuesday aborted after the pilot observed a fault in the aircraft’s cooling system while preparing for take-off.

Oyibhota said the aircraft, carrying over 100 persons, was still taxiing at the runway of the Murtala Mohammed Airport, Lagos, when the fault was observed.

“The incident happened around midday. The aircraft did not make an air return. The plane was taxiing when the Captain in charge noticed that the cabin was hot.

“If he had taken off, it could have stabilised the cooling system but as a precautionary measure, he taxied back to base.

“That was what happened and nobody was hurt. The said aircraft is on ground and our team of engineers are examining the aircraft to ascertain what led to it,” he said.

Continue Reading
You may also like...
Related Topics:nigeria, plane crash