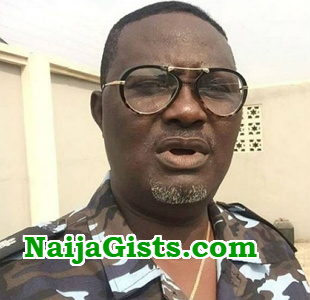 In this interview with Tony Okuyeme, versatile Nollywood actor and director, Antar Laniyan talks about his family and career.

He also explains why he wanted to join the army before joining the motion picture industry.

Antar Tunde Laniyan is an actor, director, and movie producer, full of theatrical dynamism…. God be praised. He’s an Osogbo man who would have been a soldier but for the advice from my school principal and Ben Tomoloju… Who noticed the actor in me, which I did not notice.

How old were you when you started your career as an actor?

How was it as a member of Kaakaki Troupe led by Ben Tomoloju?

To be a member of kaakaki arts kilt…, you must be a discipline individual. Ben Tomoloju taught me everything including being a discipline guy… That’s why today I don’t go to location to wine and dine… I don’t visit location uninvited.

Growing up was rough and tough… Just like any child from a middle class home….

Did you really set out to become an actor? Why?

I actually wanted to become a soldier but like I said before I took to elders advice. I grew up in the barracks… Military people are discipline people… In those days you would see them in well ironed uniforms…. Concise movements… Obedience… So many reasons….. The parade… Oh my God.

You directed Super Story for about 10 years. How did you get the job of the director?

I was invited by that good man Chief Wale Adenuga senior MFR… He was so sure I would deliver and I did….. God be praised.

What were the challenges?

No challenges because I was determined to excel… I was armed with discipline, and I succeeded. God be praised…

That was a joke among friends….

What is your greatest strength as an actor and director?

What is your take about sexual harassment in the industry?

Harassment where…. When you have a mouth to say “No…. I don’t need what you have between your thighs to become a star…. I am ready to work for it and make it…. OGA go to hell.”

What happened? I have never been embarrassed… Even when I notice a things like that…. I laugh it off.

Can you act nude if the pay is right?

What do I tell my children is wrong with my brain.

What are your plans for retirement?

I need help to have a Theatre and film academy where I can train upcoming ones….. God help me.

Playing with my kids at home, or visiting my friend Carl Olufemi Jenkins…

Who are your favourite artistes?

The discipline ones irrespective of their acting abilities…

Who are your fravourite Nigerian musicians?

Continue Reading
You may also like...
Related Topics:antar laniyan, soldier