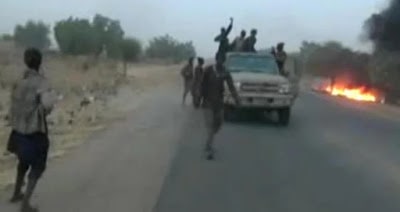 A witness has revealed how a soldier was abducted along Maiduguri road on Friday with his wife.

The source identified as Aliyu Yunusa, whose vehicle was very close to the scene of the abduction, informed our correspondent that the insurgents mounted a check-point on the road and were hunting for security operatives where they carried out the operation.

According to him, the vehicle conveying the soldier, his wife and other passengers was three vehicles away from from the ill-fated check-point when the incident occurred.

“We thought it was a normal check-point when we saw the Boko Haram boys in military uniform with a military hilux standing ahead of us.

“Our vehicle was just three vehicles away from their vehicles. We didn’t come close though but we sensed something was going on abnormal.

“When the vehicle ahead of us decided to pass, they shot at him but he didn’t stop and drove away. Our vehicle with others behind us decided to go back.

“We waited after sometime then our driver started moving towards Maiduguri.

It was after we came to Auno that all the vehicles stopped and we met the driver of the vehicle who narrated the whole story to us on how they took the soldier away with his wife,” Yunusa narrated.

According to Yunusa, the driver of the Sharon car, which was coming from Kaduna, told them on arrival at the check-point, they waited for sometime and the soldier decided to come down from the car to speak with the insurgents to allow them to pass, thinking they were his colleagues.

“It was after he got to the insurgents and showed them his ID card that they decided to hold him hostage. His wife after seeing that her husband is in danger insisted that she must follow her husband after her begging was not successful.

“It was at that point that the Boko Haram boys opened the car and asked her to enter the car and they took off to the bush,” Yunusa narrated.

The witness added the driver informed them “the Boko Haram boys after taking the soldier and his wife asked them to go and started shooting sporadically and zoomed off into the bush.”